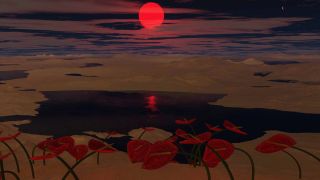 In this illustration, UW astronomer Rory Barnes imagined a planet in the habitable zone of a star roughly the size of the sun.
(Image: © Rory Barnes, University of Washington)

Alien planets could host life well into their old age if they have companion worlds tugging at them, researchers say.

Such exoplanets could potentially be the longest-lived life-friendly areas in the universe, enduring for up to 10 trillion years, scientists added.

As planets age, they cool, with their hot molten cores solidifying over time. This probably makes them geologically active and therefore less habitable for life as we know it, scientists say. On Earth, life depends on the geological activity of plate tectonics to circulate rocks that can absorb or release carbon dioxide, a greenhouse gas that absorbs heat. Without plate tectonics, the planet might experience runaway heating or cooling, and thus potentially become uninhabitable. [10 Exoplanets That Might Support Alien Life]

In a new study, scientists have found that if a world has a companion planet that gravitationally tugs on it, this could prevent that world from cooling, and thus extend its chances of hosting life.

The researchers analyzed red dwarfs stars, also known as M dwarf stars. These stars are up to 50 times dimmer than the sun and up to less than 10 percent as massive. Red dwarfs are the most common kind of star, making up to 70 percent of the stars in the universe, and this fact has made scientists wonder if these red dwarfs might be the best places to look for alien life.

Because there is life nearly wherever there is water on Earth, scientists typically define planets as potentially habitable if their surfaces are warm enough to sustain water on their surfaces. Red dwarfs are cold stars, which means their habitable zones are closer than Mercury is to the sun — sometimes less than 0.1 astronomical units (AU), or one-tenth the average distance from Earth to the sun. The average distance between Earth and the sun is about 93 million miles (150 million kilometers).

Red dwarfs are colder than the sun, which means they burn fuel more slowly and live far longer. Prior research has suggested that the most readily discoverable Earth-size habitable-zone planets are likely to be about 10 billion years old — more than twice the age of 4.6-billion-year-old Earth.

Ordinarily, plate tectonics ends due to cooling long before a planet reaches 10 billion years in age. However, the researchers found that if this old world has a companion planet orbiting a bit farther away from the star, this outer planet can pull the old world into an orbit that will keep it warm enough for plate tectonics.

The scientists modeled a rocky planet with the same mass and diameter as Earth's in the habitable zone of a red dwarf just 10 percent of the sun's mass. This red dwarf is about 1,000 times less luminous than the sun, meaning its habitable zone is only about 3 percent of an AU.

The researchers modeled outer planets with masses equal to those of Earth, Neptune, Saturn, Jupiter and larger. They found that the gravitational pulls of outer planets with a variety of masses and orbits can drag an inner rocky planet into an eccentric oval-shaped orbit. This means that the distance of the inner planet from its star changes over time.

This constant tidal flexing causes layers inside the planet to rub against each other, producing warmth. This effect, known as tidal heating, is what drives volcanism on Jupiter's moon Io.

"For planets in the habitable zone around low-mass stars, tides raised on the planet by the star can be very important," lead study author Christa Van Laerhoven, a planetary scientist who will soon be a postdoctoral researcher at the Canadian Institute for Theoretical Astrophysics in Toronto, told Space.com. "Tides raised on the habitable zone planet by its star can provide a long-term internal heat source if there is another well-placed planet in the system."

Tidal heating could help keep a rocky planet internally warm and tectonically active in the habitable zone of a red dwarf for the star's lifetime of up to 10 trillion years, or more than 700 times the 13.7-billion-year history of the universe, Barnes said.

"Perhaps in the distant future, after our sun has died out, our descendants will live on worlds like these,"Barnes said in a statement.

The researchers suggested that if astronomers were to find any Earth-size planetsin the habitable zones of red dwarfs, they should follow up with searchers for outer companion planets that might improve the inner world's chance at hosting life. In the future, they also hope to model systems with three or more planets.

Van Laerhoven, Barnes and their colleague Richard Greenberg detailed their findings in the July issue of the journal Monthly Notices of the Royal Astronomical Society.