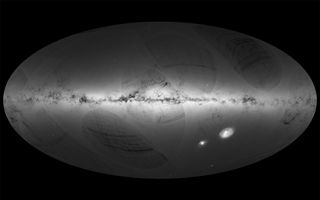 This all-sky view of the stars in our Milky Way galaxy, as well as neighboring galaxies, take center stage in this sky map by the European Space Agency's Gaia satellite during its first year of operation.
(Image: © ESA/Gaia/DPAC)

The most detailed 3D map yet of a billion stars in the Milky Way galaxy was released today (Sept. 14), along with a sneak peek at brand-new data on millions of stars collected by the European Space Agency's Gaia spacecraft.

Gaia has been scanning the sky to create a catalog of more than a billion stars in and around the Milky Way since 2014. Today's first data release includes precise positions and brightness of 1.142 billion stars, plus distances and motions of more than 2 million stars. ESA scientists used the observations to create this stunning fly-through of a packed star cluster.

Just 14 months into its 5-year mission, Gaia's data release is only the beginning of loads of new information about our galaxy that Gaia is expected to produce. The mission will ultimately build the most comprehensive, detailed and accurate star catalog of all time. [Photos: Gaia Spacecraft Is Mapping Milky Way Galaxy]

"Gaia is at the forefront of astrometry, charting the sky at precisions that have never been achieved before," ESA's Science Director Alvaro Giménez said in a statement.

Data from Gaia will be used not just for constructing a gigantic and unprecedented 3D map of the Milky Way, but it will also inspire new research. For example, knowing the stars' positions, movements and other physical qualities could help researchers study the structure and history of the Milky Way galaxy.

In the same statement, Anthony Brown of Leiden University in the Netherlands said Gaia data will allow researchers "to investigate our place in the Universe, from our local neighborhood, the Solar System, to Galactic and even grander, cosmological scales." Brown is chairman of the Gaia consortium.

While this may be the biggest and most ambitious galaxy-mapping endeavor yet, the vast amount of stars observed in this mission will represent only about 1 percent of all of the stars in the Milky Way galaxy.