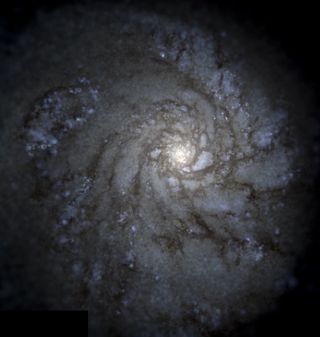 The Milky Way's galactic neighborhood doesn't look the way it should, and now scientists think they know why.

In the space surrounding Earth's home galaxy, the Milky Way, there should be lots of small galaxies — at least according to computer models and scientific predictions. But the neighborhood is mostly free of those small galaxies. Were those predictions fundamentally wrong, or was there something actively stopping the birth of new galaxies?

New research strongly suggests itꞌs the latter — and the culprit in these galactic homicides are exploding stars called supernovas. The finding comes from computer simulations done by researchers at the California Institute of Technology. [Stunning Photos of Our Milky Way Galaxy (Gallery)]

"Previous models predicted that there should be thousands of little galaxies … swarming around our own Milky Way galaxy," said Phil Hopkins, an associate professor of theoretical physics at  Caltech and principal scientist for the new research. Hopkins spoke in a new video produced by Caltech. "And, when we looked, we didn't see these galaxies. We have powerful enough telescopes that we should have seen them by now. And people speculated that maybe something was fundamentally broken about our understanding of the origins of the universe."

Observations only showed "20 or 30" small galaxies around the Milky Way instead of the thousands that were predicted, Andrew Wetzel, a research fellow at Caltech and one of the authors of the new research paper, said in the video. This mystery was dubbed "the missing satellite problem." (Other potential solutions to this mystery have been suggested in the past).

What the new computer simulation shows is that these missing galaxies begin to form as predicted, but are destroyed early in their lives by exploding stars known as supernovas, which occur when very hot, massive stars run out of fuel and die in this very dramatic way. The energy released in one of these explosions is so immense "that it can basically destroy the galaxy," Hopkins said. Because these massive stars lie inside the newly forming galaxies, this could be viewed as a case of self-destruction.

The human brain is well equipped to create virtual simulations of reality. For example, as a person is driving home from work, his or her brain will run through a simulation of what should happen on the road. For example, other cars on the road should stay in the right lane, stop at red lights, etc. By comparing that mental simulation with what's happening in reality, it's easier for a driver to spot problems or hazards (like a driver swerving into the wrong lane).

A computer simulation of the universe is built for much the same reason — to pinpoint the places where prediction varies from reality. So imagine driving to work and finding that everyone was driving on the left side of the road, or stopping at green traffic lights. That kind of variation from prediction would make any driver wonder if the rules they knew about driving were entirely wrong.

As scientists slowly realized that their models were vastly overestimating the number of dwarf galaxies around the Milky Way, they had to find out why there was such a drastic disconnect between simulation and reality.

The most important "rule" of the universe that goes into this kind of simulation is the equation that calculates the pull of gravity between two bodies, he said.

"Gravity pulls everything together," Hopkins said. "And the equation for gravity is pretty simple for a system like the Earth going around the sun. The problem is, [in] a galaxy you've got a hundred billion stars, not to mention all the gas and dark matter that you don't see. So we need to solve a simple equation but do it a hundred billion times. Over and over and over again. And that's what computers are really great at."

These simulations require supercomputers consisting of thousands of individual servers to run these simulations. If scientists hope to identify variations between reality and the simulation, their models have to be as detailed as possible.

If, as these simulations show, those thousands of dwarf galaxies were torn to shreds very early in their lives, then there would still be leftover stars and other debris strewn in the area nearby. This would explain the Milky Way's so-called "stellar halo," which is a diffuse cloud of stars and dust surrounding the galaxy. That halo "is actually the graveyard of all these dwarf galaxies that got torn apart," Wetzel said.

The work was published in the Astrophysical Journal Letters on Aug. 12.