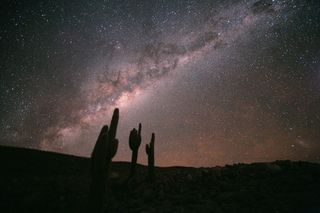 Large cacti appear to point at the sky in the Chilean Atacama Desert. The Milky Way dominates the image, with the Large Magellanic Cloud in the lower right. These cacti (Echinopsis atacamensis) grow on average 0.4 inches (1 centimeter) per year, and reach heights of up to 30 feet (9 meters). These particular plants are found on the winding road connecting ESO's Atacama Large Millimeter/submillimeter Array (ALMA) Operation Support Facility to the Array Operation Site at ESO, at an altitude of about 11,500 feet (3500 meters)
(Image: © ESO/S. Guisard)

A new study has pinned down the age of the Milky Way's outer reaches with unprecedented precision, shedding light on how our galaxy and others across the universe came to be.

"You've basically eliminated one of the main hindrances that we had to put together a complete picture of how galaxies evolve and get shaped over time," Kalirai told SPACE.com. [Stunning Photos of Our Milky Way Galaxy]

The structure of the Milky Way

The Milky Way is composed of three main parts: a central bulge, a relatively flat disk and a roughly spherical surrounding halo.

The halo consists of globular clusters — densely packed conglomerations of hundreds of thousands or millions of stars — as well as singleton "field" stars that sit alone in the blackness of space. Many scientists think the halo is made up of two separate stellar populations, so they subdivide the region into an inner halo and an outer halo.

These three chief components of the Milky Way are thought to have formed at different times, with the halo taking shape first.

The oldest globular clusters in our galaxy are 13.5 billion years old, meaning they formed just 200 million years or so after the Big Bang that created the universe. But astronomers have had less success in dating halo field stars precisely, so an understanding of how and when the overall halo came to be has proved elusive. [Images: Peering Back to the Big Bang]

"We really don't have any good age diagnostics for low-mass stars," Kalirai said.

To help address this issue, Kalirai looked at dying halo field stars, ones that have just transitioned from active fusion factories to odd objects known as white dwarfs.

White dwarfs are the remnants of relatively small stars that have exhausted their fuel, leaving behind dim but superdense cores of material. The vast majority of stars in the galaxy, including our own sun, will end up as white dwarfs.

A white dwarf's density is 1 million times that of "normal" matter that we're used to here on Earth, Kalirai said. But these exotic bodies are actually quite simple in important ways.

"It's such a simple star," Kalirai said. "The physics of the star is dominated by one atom — hydrogen."

Kalirai took advantage of this uncomplicated nature. Using data from several different telescopes around the world, he developed a way to determine the age of a newly minted white dwarf by analyzing its hydrogen emissions.

Kalirai realized that these emissions, analyzed properly, reveal the white dwarf's mass and other important characteristics, which can then be used to estimate how old the object was when it made the switch from active star to dying dwarf.

He calibrated the technique by studying the spectra of newly formed white dwarfs — identified by their temperature — in the globular cluster Messier 4, which has a known age of about 12.5 billion years. Once he confirmed that the method works, Kalirai looked at four stars in the inner halo that have just become white dwarfs.

Studying these four yielded an age of 11.7 billion years, plus or minus 700 million, for the inner halo field. The results — which are much more precise than previous inner-halo age estimates, Kalirai said — were published today (May 30) in the journal Nature.

"This new chro­nometer provides a means to determine the ages of stellar populations in the halo, and will increase our knowledge of how and where the galaxy’s stars have formed and evolved," Timothy Beers, of the Kitt Peak National Observatory and the National Optical Astronomy Observatory in Tucson, Ariz., wrote in an accompanying perspectives piece in Nature.

An age of 11.7 billion years for the inner halo makes a certain amount of sense. The outer halo is thought to be slightly older, after all, and the most ancient galaxy clusters suggest that the Milky Way's building blocks began coming together around 13.5 billion years ago or so.

Kalirai plans to look at newly minted white dwarfs in the outer halo to get an age for the field stars in that region. And he also wants to study more dwarfs in the inner halo, so he can get a better idea of how long it took the stars there to form.

The new technique can't be directly applied to other galaxies, since white dwarfs so far away are too dim for their spectra to be studied in detail. But the results should still help astronomers understand fundamentals of galactic evolution that hold beyond our own Milky Way, Kalirai said.

"If you know the age of the inner halo forming, you're constraining something more general about the ways galaxies form," he said.