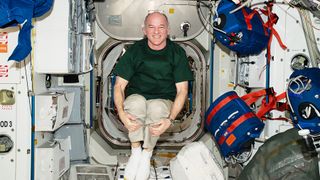 After spending six months (172 days) in space, three space station crew members are preparing to return to Earth today (Sept. 6) — and you can watch their departure, descent and landing live here on Space.com.

NASA astronaut and Expedition 48 Commander Jeff Williams will be capping off his record-breaking stay on the station, as the astronaut who has spent the most cumulative time in space.

Williams, along with Russian cosmonauts Oleg Skripochka and Alexey Ovchinin, will undock from the International Space Station to begin their journey home at 5:51 p.m. EDT (2151 GMT). You can watch the undocking and their journey home in a live webcast here on Space.com starting at 5:30 p.m. EDT (2130 GMT), courtesy of NASA TV.

"I will certainly miss this view! Vast gratitude toward my crewmates, ground teams, supporting friends, and family," Williams said in a tweet this morning.

Williams and his Russian crewmates arrived at the space station on March 18 and have been very busy maintaining hundreds of scientific experiments and undertaking multiple spacewalks over the course of their six-month stay.

On Aug. 19 and Sept. 1, Williams spacewalked with Kate Rubins to perform vital tasks on the exterior of the orbiting lab, including installing the first International Docking Adapter and retracting a thermal control radiator that was no longer in use, but in jeopardy of being damaged by orbital debris.

This will conclude Williams' fourth mission on the space station, during which time he has accrued a record-breaking 534 days in space.

Rubins, Ivanishin and Japanese astronaut Takuya Onishi will remain on the station. NASA astronaut Shane Kimbrough and Russian cosmonauts Andrey Borisenko and Sergey Ryzhikov will join the crew aboard the space station on Sept. 23.