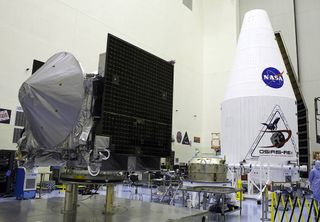 The launch of NASA's first asteroid-sampling mission is less than a week away and won't be affected by a nearby SpaceX rocket explosion that occurred yesterday (Sept. 1), space agency officials say.

On Thursday, Sept. 8, NASA's OSIRIS-REx spacecraft is scheduled to launch from Florida's Cape Canaveral Air Force Station, kicking off a two-year journey to a near-Earth asteroid named Bennu. Lift off of the probe's Atlas V rocket is set for 7:05 p.m. EDT (2305 GMT) and remains on track despite the explosion of a SpaceX Falcon 9 rocket at a nearby launchpad yesterday.

If all goes according to plan, OSIRIS-REx will rendezvous with the 1,650-foot-wide (500 meters) Bennu in July 2018, grab a hefty chunk of asteroid material two years later and return that sample to Earth in September 2023.

The main goal of the $800 million mission — whose name is short for Origins, Spectral Interpretation, Resource Identification, Security-Regolith Explorer — involves better understanding of the role carbon-rich asteroids such as Bennu may have played in delivering the building blocks of life to Earth, OSIRIS-REx team members have said.

"Bennu has what we believe to be some of the most primitive, organic-rich material that exists in our solar system," Daniel Scheeres, leader of the mission's radio-science team, said in a statement.

"We think it was initially distilled out of gas during the dawn of the solar system, which is the main reason it was chosen for the mission," added Scheeres, an aerospace engineering professor at the University of Colorado Boulder.

OSIRIS-REx's observations will also help scientists refine their understanding of the threat Bennu poses to Earth. (There's a slight chance the space rock could hit the planet in the late 22nd century.)

"By visiting Bennu, we can very precisely determine its orbit, determine the physical forces affecting it and do a much better job of predicting where it will be in the next couple of hundred years," Scheeres said. "By then we should know if we need to start building a giant space tugboat."

The mission will also investigate the resources Bennu possesses, providing information that may prove useful to future asteroid miners, NASA officials have said.

OSIRIS-REx is NASA's first asteroid-sampling mission, but it's not the first one in history. Japan's Hayabusa mission sent home tiny pieces of the asteroid Itokawa in 2010, and Hayabusa 2 launched in December 2014 to snag samples from a different space rock.

NASA has mounted other types of sample-return missions in the past. The Apollo astronauts brought hundreds of pounds of rocks home from the moon, for example, and the robotic Genesis and Stardust spacecraft grabbed particles from the solar wind and a comet, respectively.