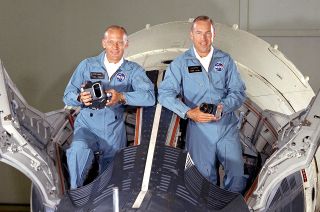 Buzz Aldrin and Jim Lovell, seen here in a 1966 Gemini 12 photo, will celebrate their mission's 50th anniversary in November 2016 in Florida.
(Image: © NASA)

Buzz Aldrin and Jim Lovell will mark the 50th anniversary of their 1966 Gemini 12 mission at a gala hosted by the Astronaut Scholarship Foundation.

The celebration, to be held on Saturday, Nov. 12, as a part of the Foundation's annual Space Rendezvous weekend in Cape Canaveral, Florida, will bring together the two former crew mates, along with more than two dozen of their fellow astronauts for the special evening.

Proceeds from the Gemini 12 50th anniversary dinner, as well as the weekend's other planned activities — including an astronaut autograph and memorabilia show held at the Kennedy Space Center Visitor Complex — will benefit the Astronaut Scholarship Foundation, which rewards students who are excelling in science and engineering degrees. [See photos from NASA's Gemini space missions]

"It is a great way to honor Gemini 12 and all the missions accomplished," said Tammy Knowles-Sudler, the executive director of the Astronaut Scholarship Foundation (ASF).

Lovell and Aldrin lifted off atop a Titan II rocket on the four-day Gemini 12 mission on Nov. 11, 1966. The tenth and last flight of NASA's two-seater space capsule, the historic mission demonstrated in Earth orbit what was required to send astronauts, including Lovell and Aldrin, to the moon.

In addition to achieving a rendezvous and docking with an Agena target vehicle, the Gemini 12 crew also conducted the world's first productive extravehicular activity (EVA), or spacewalk. Over the course of his three excursions, Aldrin logged a total of five and a half hours floating outside the Gemini, demonstrating astronauts could work while in the vacuum of space.

With their splashdown on Nov. 14, 1966, Lovell and Aldrin ended the Gemini program. Two years later, Lovell flew aboard Apollo 8, the first crewed mission to orbit the moon. Seven months later, Aldrin and Neil Armstrong became the first land and walk on the lunar surface on Apollo 11.

"The weekend is about honoring heroes who have defined the space program and about the future missions for this country," said Knowles-Sudler. "Being able to have the two astronauts who ended the Gemini program and began the Apollo program is a dream for space enthusiasts and we are happy to bring this once-in-a-lifetime experience to the public."

In addition to Aldrin and Lovell, the gala guests will include Glynn Lunney, who was Flight Director in Houston Mission Control for the Gemini 12 mission. Thomas Stafford, who flew on both Gemini 6 and Gemini 9, is also scheduled to attend, as are Apollo astronauts Alan Bean, Vance Brand, Walt Cunningham, Charlie Duke and Al Worden.

The Foundation's Space Rendezvous will also feature a Friday evening (Nov. 11) Fireside Chat with children of the Apollo astronauts, who will share their unique perspectives on their parents' legacies, and an astronaut autograph and memorabilia show on Saturday (Nov. 12).

The event is also timed to coincide with the premiere of "Heroes and Legends, featuring the U.S. Astronaut Hall of Fame," an attraction opening at NASA's Kennedy Space Center Visitor Complex that celebrates the pioneers of the Mercury, Gemini and Apollo programs.

The ASF, which oversees the selection of the Hall of Fame inductees, is also honoring the 35th anniversary of the first space shuttle missions, STS-1 and STS-2, at a separate gala being held at Space Center Houston on Sept. 17.

Tickets for both the shuttle anniversary dinner in Houston and Gemini 12 50th anniversary gala dinner in Florida, as well as the overall Space Rendezvous weekend, are now available through the Foundation's website. The Gemini 12 event venue, along with further details about the evening, will be announced in the coming weeks.