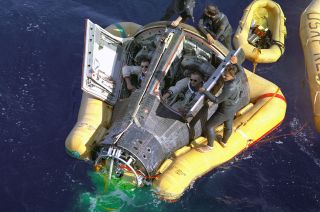 The Gemini 8 crew of Neil Armstrong and David Scott are seen being recovered from the Pacific Ocean after splashing down from space in March 1966.
(Image: © NASA )

NASA's Project Gemini was a series of two-astronaut spaceflights that set the stage for Project Apollo and the eventual manned moon landings. See photos from the Gemini program here. Shown Here: Astronauts John Young and Gus Grissom are pictured during water egress training in a large indoor pool at Ellington Air Force Base, Texas, in this image from 1965. Young is seated on top of the Gemini capsule while Grissom is in the water with a life raft.

On March 23, 1965, astronauts Virgil I. “Gus” Grissom and John W. Young participated in the first crewed Gemini flight, Gemini III. The flight of the “Molly Brown,” which was named after the Broadway musical and was a reference to Grissom’s previous Mercury craft, the Liberty Bell 7, which sank shortly after splashdown, was intended to test the new maneuverable Gemini spacecraft. The mission was considered a success despite a few thruster issues and the sudden appearance of a contraband corned beef sandwich. This photo was taken of the two pilots in the spacecraft simulator at the McDonnell plant in St. Louis, Missouri.

On Dec. 26, 1963, ownership of this facility officially was transferred from the U.S. Air Force to NASA. Now called the Mission Control Center, it continued to be the flight control through the first three missions of Project Gemini. The first two, Gemini I and Gemini II, were to qualify the Gemini spacecraft-Titan II rocket combination.

President Lyndon B. Johnson holds a Gemini-4 souvenir photo album which he was presented during his visit to the space center. Astronaut James A. McDivitt, command pilot of the Gemini-4 spaceflight;holds a framed picture of White's "spacewalk" which was also given the President.

Schirra, Stafford and Gemini on Deck

This photograph of the Florida Straits and Grand Bahama Bank was taken during the Gemini IV mission during orbit no. 19, on June 4, 1965. The Gemini IV crew conducted scientific experiments, including photography of Earth's weather and terrain, for the remainder of their four-day mission following Ed White's historic spacewalk on June 3.

Schirra and Stafford Suit Up

Gemini VI astronauts Walter Schirra (seated), command pilot, and Thomas Stafford, pilot, go through suiting up exercises in preparation for their forthcoming flight in this image from October 1965. The suit technicians are James Garrepy (left) and Joe Schmitt. On the third attempt, Gemini VI successfully launched on Dec. 15, 1965.

This Gemini VII photograph of Kennedy Space Center in Florida was taken on Dec. 6, 1965 during orbit no. 30 at 19:25 GMT. Launch Complex 19 where Gemini VII was launched two days earlier, on Dec. 4, can be seen along the shore at the bottom. The channel of the intracoastal waterway can be seen near the bottom center of the image.