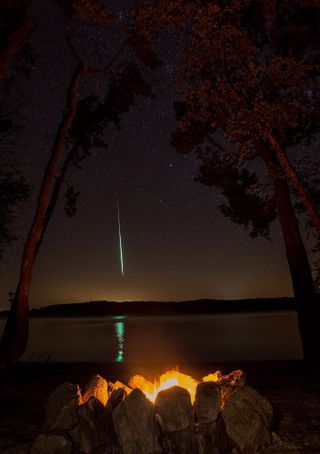 After waiting for hours in record-breaking heat for a glimpse of the much-anticipated Perseid metor shower of 2016, astrophotographer Chris Sheridan had reason to celebrate.

"I told myself numerous times last night, as I was sweating my a-- off, that this trip to shoot might not have been the best idea I have had with this drenching heat. Then at 3:40 am ... the pay-off. Spectacular!" he wrote in an image description sent in to Space.com.

Sheridan captured this image the image from Kerr Lake on the North Carolina – Virginia border on Friday (Aug. 12) during the peak of the Perseid meteor shower. And, he had a little celebration to mark the moment.

"Yeah, I did the fireball dance in the dark like nobody was watching," Sheridan added. [See more awesome photos of the 2016 Perseids]

The fireball shoots through in green creating a dazzling reflection on the lake. According to NASA research, the Perseid meteor shower produces more fireballs — bright meteors that streak across the sky — than any other annual shower, earning it the title of "fireball champion."

The high rate of fireballs could have something to do with the meteor shower's progenitor: Comet Swift-Tuttle. Every year, the Earth passes through a trail of dust left behind in the comet's wake. The dust burns up in Earth's atmosphere, creating the brilliant shower.