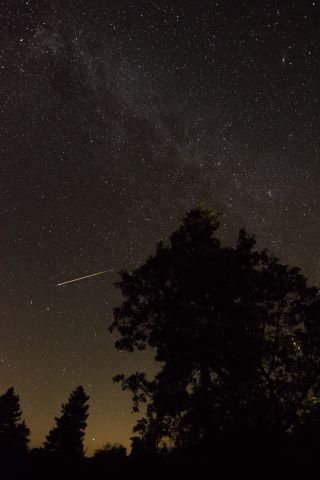 The Perseid meteor shower peaked last night (Aug. 11-12), dazzling the Northern Hemisphere with shooting stars across the sky — and Space.com readers caught some amazing photos of the spectacle.

A bright moon made this year's Perseids more challenging to capture, but once the moon set late-night stargazers took full advantage of the peak — like Jason Miller, who caught the above photo of a Perseid meteor streaking over Mount Laguna, California in the wee hours of the morning. You can see more awesome photos of the 2016 Perseids here, which were sent in by Space.com readers.

If you missed the peak of the Perseids last night, NASA's Marshall Space Flight Center will host another Ustream live webcast overnight tonight (Aug. 12-13), starting at 10 p.m. ET (0200 GMT). You will also be able to watch the NASA Perseids webcast on Space.com, courtesy of the Marshall center. [Perseid Meteor Shower 2016: How and When to See It]

The Perseids come around every year when Earth passes through the streams of dust and debris left behind by Comet Swift-Tuttle, which whips past Earth in its orbit around the sun every 133 years. This year, the peak was forecast to be particularly spectacular — the Perseids were in a rare outburst, according to NASA scientists.

Alex Paul took this vivid image of the Perseid meteor shower just after midnight this morning in northern Indiana.

NASA calls the Perseids the "fireball champion" meteor shower because it tends to have bright meteors that can be seen even in less than favorable conditions.

"A bright flash of a meteor as the light of the moon began to dim," Barbara Matthews told Space.com in an email along with her photo, above. "Taken in Nevada County, California, the normally clear dark skies tinged with smoke from ongoing forest fires in the state."

Meteor showers last a long time, and there are spectacular views even befor the peak — and viewers have been spotting Perseids in the sky all week (as have NASA's All-Sky Fireball Network cameras for weeks, as shown in this space agency video of the celestial fireworks).

"Skies were clear and I was away from city lights, but I only saw about 25 meteors in the 3 hours I was out," he wrote. "I didn't even realize I caught this image until I got home."

John Entwistle grabbed this shot in the early morning over the beach at Corolla, Outer Banks, NC, using a 25-second-long exposure. And several other skywatchers captured amazing views of the Perseids in the days before the shower's peak.

One photographer, Sergio Garcia Rill, snapped a gorgeous view of a Perseid meteor streaking over the Enchanted Rock State Park in Texas, an International Dark-Sky Association site, on Aug. 7.

Even though the peak has passed, the meteor shower continues: Rates are still high tonight, and Earth will keep passing through the streams of debris for quite some time. So if you missed last night or want to try again and catch the perfect photo, get out there! Space.com can't wait to see what you find.