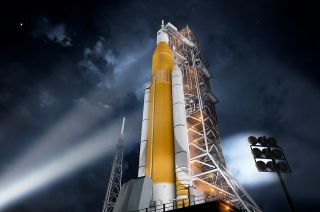 Artist's illustration of NASA's Space Launch System (SLS) rocket on the pad. SLS is scheduled to fly for the first time in late 2018.
(Image: © NASA)

There's been some confusion and controversy about this claim ever since the SLS — which NASA is developing to get astronauts to Mars and other deep-space destinations — was announced in September 2011.

NASA officials have long maintained that the most muscular form of the SLS will be capable of lofting 143 tons (130 metric tons) of payload to low-Earth orbit (LEO). That's where the confusion comes in: The LEO capacity of the agency's famous Saturn V moon rocket was about 154 tons (140 metric tons), according to a 2006 U.S. Congressional Budget Office (CBO) report. [Photos: NASA's Space Launch System for Deep Space Flights]

But arguments for the Saturn V's supremacy are based on a flawed, apples-to-oranges comparison, said Kimberly Robinson, manager of strategic communications for SLS at NASA's Marshall Space Flight Center in Huntsville, Alabama.

Specifically, the 143-ton figure for SLS refers to pure payload, whereas the Saturn V could loft 154 tons of "injected mass," Robinson said.

That injected mass included the Saturn V's third stage, as well as the fuel present in the stage, according to the authors of the 2006 CBO report (who wrote that they sourced their information from Richard Orloff's "Apollo by the Numbers: A Statistical Reference").

The SLS team has calculated some apples-to-apples comparisons, and the new rocket comes out on top, Robinson said Aug. 3 during a presentation with NASA's Future In-Space Operations (FISO) working group.

"We have a payload mass to LEO of about 122.4 metric tons [135 tons] for Saturn V," said Robinson, who did not give the FISO presentation but chimed in to answer a question posed by a listener. (The FISO talk was given by Chris Sanders of Aerojet Rocketdyne, Bob DaLee of Boeing and Orbital ATK's Mike Fuller. These three companies are the prime contractors for SLS.)

The "injected mass" capacity of SLS comes out to 173 tons (156.9 metric tons), Robinson added. She, Sanders, DaLee and Fuller all cautioned, however, that these numbers for SLS are not carved in stone.

"We're talking about a 130-metric-ton-class vehicle," Robinson said. "It doesn't tell you exactly the capability."

The path to Mars

SLS is an evolvable vehicle, with three primary variants currently envisioned. All of them consist of a core stage, along with two solid rocket boosters (SRBs).

But SLS was not designed with Earth orbit in mind. The rocket is a key part of NASA's plan to get astronauts to Mars, which the agency aims to do before the end of the 2030s.

SLS will launch Red Planet pioneers aboard the Orion crew capsule, which is also in development. Orion has one flight under its belt, an unmanned test to Earth orbit in December 2014 that lifted off atop a United Launch Alliance Delta IV Heavy (which is the most powerful rocket currently in operation).

SLS is scheduled to make its maiden flight in 2018, when a Block 1 booster will launch an uncrewed Orion on a weeklong trip around the moon known as Exploration Mission-1 (EM-1).

The SLS team has been notching its milestones, including an SRB ground test in June, on time and as expected, DaLee said.

"Everything looks good and on schedule for a late '18 launch," he said during the FISO talk.

Planetary missions launching atop the SLS could get to their destinations much more quickly than probes sent on their way by currently available rockets, and also carry more science gear, DaLee said.

As one example, he cited the as-yet-unnamed robotic mission NASA plans to launch toward the potentially life-harboring Jupiter moon Europa in the 2020s. A Europa mission that launched atop an SLS Block 1B, as opposed to a United Launch Alliance Atlas V rocket, could shave 4.5 years off the journey (from 6.5 years down to 2 years) and carry twice as much payload, DaLee said.