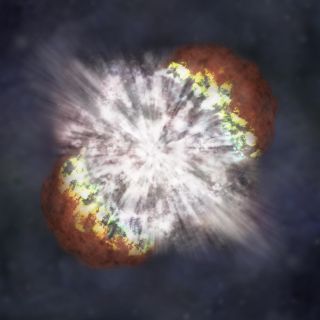 This artist's illustration of a supernova shows a shell of material being expelled from the dying star, as well as a burst of bright light.
(Image: © NASA)

A mysterious kind of supernova that appears to explode twice may be giving birth to some of the most powerful magnets in the universe, a new study finds.

Supernovas are explosions that occur when certain types of stars run out of fuel and "die." These outbursts can briefly outshine all of the millions of other stars in their galaxies.

Recently, scientists detected a very rare class of supernova, known as superluminous supernovas. These star explosions are up to 100 times brighter than other supernovas. The superluminous variety account for less than a thousandth of all supernovas, and only about 30 examples have been studied well. [Supernova Photos: Great Images of Star Explosions]

"They are extremely bright and can be seen for up to a year but are incredibly rare, so [they] are difficult to find and measure," said study lead author Mathew Smith, an astrophysicist at the University of Southampton in England. "We don't yet know the physical origin of these cosmic explosions that can be seen out to the beginning of the universe; that's the main focus of current and future searches."

Mysteriously, previous research suggested that some superluminous supernovas appear to explode twice. Before their main explosions, each of these supernovas experience a spike in brightness that lasts a few days.

The researchers discovered this superluminous supernova, named DES14X3taz, in 2014 by examining data from the Dark Energy Survey. DES14X3taz is located about 6.4 billion light-years from Earth.

Using the Gran Telescopio Canarias, a telescope in Spain's Canary Islands, the team of astronomers carried out follow-up observations shortly after DES14X3taz was first detected. This helped the researchers to see how the supernova's temperature evolved over time.

The researchers saw that after the initial spike of brightness, the object rapidly cooled off. Another, more powerful burst of brightness followed.

Following the initial spike in brightness, this supernova gave birth to a magnetar, the researchers said. Magnetars are among the most powerful magnets in the universe. They are a kind of neutron star, which is the leftover core of material in a dead massive star. To reach this conclusion about the magnetar birth, the researchers compared the data with several physical models of supernovas.

The explosion created by the magnetar's formation heated up the bubble expelled by the first explosion, leading to the second, more powerful burst of brightness, the researchers found.

However, the researchers said that their most surprising discovery was "not that the supernova had a double peak, but that there's significant evidence that most superluminous supernovae do, too," Smith told Space.com.

Previous research of past superluminous supernovas suggested "these astrophysical objects are all highly similar, and thus presumably, one explosion mechanism can explain them all," Smith said.

"The hunt is now on to find these events early and really tie down what causes them," Smith said. "Fingers crossed we find some more."

The scientists detailed their findings online July 26 in The Astrophysical Journal Letters.