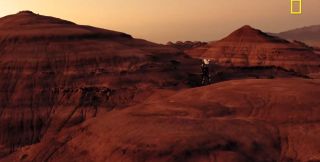 Humans have long been fascinated with Mars, and a new TV special on the National Geographic Channel will combine real-world stories with a scripted narrative to take viewers on a journey to the Red Planet.

Called "Mars," the six-part series will tell the story of a fictional astronaut crew on the very first human Mars mission in 2033. In the TV special, the crew of the Daedalus, led by American Mission Commander Ben Sawyer (played by Ben Cotton) lands on Mars and sets up a preliminary base.

In addition to this fictional story, the series weaves in interviews with a number of real-world space experts. (The full list is at the bottom of this story.) [Manned Mars Mission: How NASA Could Do It]

"Mars," which will debut in November 2016 (a specific date has not been set), is backed by some serious Hollywood cred as well — Academy Award-winning filmmakers Ron Howard and Brian Grazer were producers on the new series.

"The offer to the audience will be information meets vivid and experiential filmmaking," Howard continued. "Nat Geo's ambition was high, and we are really honored and thrilled to try and meet that challenge."

To make the production as realistic as possible, the team consulted a number of space experts, including Robert Braun (an aerospace engineer at the Georgia Institute of Technology) and Mae Jemison (a former NASA astronaut who was the first black woman in space. Jemison "acted as a space adviser on the series, working closely with the cast to help them hone their portrayals," according to the statement.

National Geographic said it "received exclusive access" to billionaire entrepreneur Elon Musk, founder and CEO of the spaceflight company SpaceX, when the company made its first-ever landing of a Falcon 9 reusable rocket on a drone ship last April. Musk is well known for harboring ambitions to send humans to Mars one day.

"The future of humanity is fundamentally going to bifurcate along one of two directions: Either we're going to become a multiplanet species and a spacefaring civilization, or we're going to be stuck on one planet until some eventual extinction event," Musk said in the series, according to the statement. "In order for me to be excited and inspired about the future, it's got to be the first option."

To complement the series, National Geographic's November issue will have a cover story on Mars. Additionally, the company will produce a book for adults called "Mars: Our Future on the Red Planet," on sale beginning Oct. 25. (Disclosure: The book was written by Space.com contributor Leonard David.) National Geographic will also release a second book for children called "Mars: The Red Planet" (on sale beginning Sept. 27).

The series will air in 171 countries. It is produced by Imagine Entertainment and RadicalMedia for National Geographic Channel. Ongoing coverage of the series will be available at makemarshome.com and nationalgeographic.com.

Here is the full list of people who are interviewed in the series: