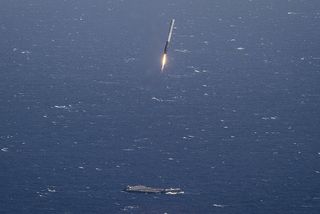 The first stage of SpaceX's Falcon 9 rocket comes in for a successful landing on a robotic drone ship in the Atlantic Ocean on April 8, 2016.
(Image: © SpaceX)

On Friday (April 8), SpaceX brought the first stage of its Falcon 9 rocket down for a soft landing on a robotic "drone ship" in the Atlantic Ocean during the successful launch of the company's Dragon cargo capsule toward the International Space Station. SpaceX soon released two videos, which were captured by cameras aboard the booster stage and a monitoring "chase plane," respectively. We combined the two short clips into one awesome video of the SpaceX rocket landing here.

Nobody had ever landed a rocket on a ship at sea prior to Friday's milestone flight. SpaceX had tried such drone-ship touchdowns four times in the past and missed narrowly; on every occasion, the Falcon 9 stage managed to hit its target but fell over on the ship's deck and exploded.

SpaceX has also landed a Falcon 9 first stage on terra firma, pulling off the milestone this past December during a satellite launch from Cape Canaveral Air Force Station in Florida (which was also the site of Friday's Dragon liftoff).

These rocket landings are part of SpaceX's effort to develop fully and rapidly reusable rockets, which company CEO and founder Elon Musk says could revolutionize spaceflight by dramatically reducing its cost.

Missions that launch payloads toward geostationary orbit and beyond Earth will not be able to carry enough fuel to make it back to their launch sites, Musk said during a post-launch briefing Friday; this explains why SpaceX is gaining expertise with the drone-ship landings. (The company has two such uncrewed ships, which are called "Just Read the Instructions" and "Of Course I Still Love You." Friday's landing occurred on the latter vessel.)

The Falcon 9 stage that touched down Friday should make it back to shore by Sunday (April 10). SpaceX plans to relight its engine 10 times in quick succession during tests at Cape Canaveral. If all goes well, the company aims to refly the booster by June, Musk said.