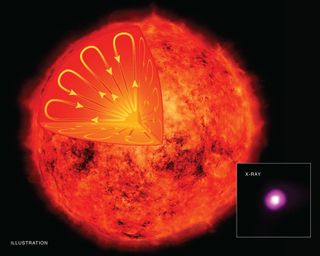 Unusual X-ray emissions coming from four old red dwarf stars suggest these old fogeys have something in common with our sun: their magnetic fields are weakening over time, new research shows.

With masses less than half that of the sun, red dwarfs are the smallest of stars (the most massive stars are 100 or more times larger than the sun, according to NASA). The relatively petite stature of these stars means they burn at a much lower temperature than the sun (and are therefore much dimmer), and have very different interior structures.

Red dwarfs also have a very different interior structure compared with the sun, which is why the authors of the new research were surprised to find similarities in the way the magnetic fields in these two types of stars change as they age. The sun's magnetic field plays a huge role in protecting Earth from harsh radiation from space, and the new results could help researchers decipher how that magnetic field is created. [Star Lash! White Dwarf Literally Whipping Red Dwarf (Video)]

Magnetic fields in the sun and stars like it are generated by a dynamo, which is a process involving convection — the rising and falling of hot gas in the star's interior — and the rotation of the star. As stars like the sun age, their rotation slows down and the strength of their magnetic field is weakened, Nicholas Wright, lead author of the new study and an astrophysicist from Keele University in England, told Space.com.

Inside the sun, a transition region called a tachocline separates the radiative core and the convective region. But smaller, low-mass stars have been shown to be fully convective, according to the new study published Thursday (July 28) in the journal Nature.

The brightness of a star's X-ray emission is a good indicator of its magnetic field strength, according to a statement from NASA. Using data from NASA's Chandra X-ray Observatory, the astronomers behind the new study discovered lower-than-expected magnetic field strength from four old red dwarf stars: Proxima Centauri, Barnard's Star, GJ3253 and G184-31, Wright said.

"We thought we'd find these [red dwarf] stars would have higher X-ray emissions like [faster rotating, younger red dwarf stars], but they have lower X-ray emissions and they show the same correlation between rotation rate and X-ray emissions that stars like our sun have," Wright said. "This means these two types of stars — red dwarfs and the sun — are operating very similar dynamo processes, despite different internal structures."

The new finding brings researchers closer to fully understanding how the magnetic field in the sun and stars like it are generated, NASA officials said in the statement.

"For a long time, we thought the tacholine was really important for how stars generate their magnetic field," Wright added. "But now, there are some doubts because red dwarfs lack that tacholine."

Although the red dwarfs appear to be rotating very slowly now, they were born rotating a lot faster. This means they would have had stronger magnetic fields and released a lot of flares at a younger age, which could have had an impact on nearby planets orbiting such stars, Wright said.

"This could be important for life around such stars, as it will mean the conditions on planets orbiting such stars will be more peaceful than we had once thought — at least once the stars have aged a little," he added.

Next, researchers hope to examine the magnetic fields of 10 other red dwarf stars, which will expand the researchers' sample size and help them confirm their findings.