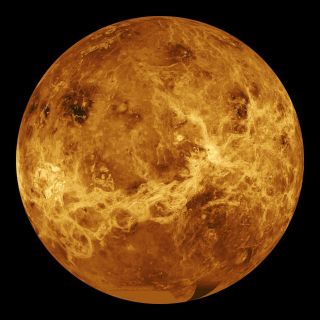 Venus is low in the sky now, but it's preparing to put on quite a show. Venus is pictured here as seen by the Magellan spacecraft, a NASA mission of the 1990s.
(Image: © NASA)

Currently, the planet Venus is visible very low in the western evening sky right after sundown. Those with obstructions such as trees or buildings toward the west may not be able to see Venus yet due to its very low altitude. But this current evening apparition of Venus is going to evolve into a very good one in the coming days and weeks, so let's get into a fuller explanation of what is to come.

Venus passed superior conjunction, when it appears to go directly behind the sun as seen from Earth, back on June 6. Initially, it was mired deep in the brilliant glare of the sun. Nonetheless, in the days that followed it moved on a steady — albeit very slow — course toward the east and gradually pulled away from the sun's vicinity.

And now, as we make the transition from July into August, Venus has finally begun climbing up out of the sunset glow in earnest and is about to reclaim its role as the brilliant "evening star," a title it has not held since one year ago. Look for it now by scanning with binoculars shortly after sundown very low in the western sky. Venus will stand about 10 degrees high in the western sky at sundown (your clenched fist held at arm's length is about 10 degrees wide) and will touch the horizon about 50 minutes after sunset, giving less-experienced skywatchers the chance to get a good glimpse. [Skywatching In 2016: The Year's Must-See Events]

During August, it will be interesting to watch as Venus and Jupiter converge on each other in the evening sky. In contrast to Venus, Jupiter is now fast departing into the west after sundown. Venus is even lower in the sunset than Jupiter for most of August. However, Venus is nearly eight times brighter and is working its way slowly upward as the weeks go by. Venus and Jupiter move 1 degree closer together each evening until reaching a very close conjunction on Aug. 27, when they'll be less than 0.1 degrees apart as seen from the eastern half of North America. This event will be worth a special trip with binoculars to someplace commanding a scenic view of the western horizon.

During September Venus should become a bit easier to see. By Oct. 1, it will set about 30 degrees south of due west nearly 75 minutes after sunset. Venus will continue to swing east of the sun as the fall season progresses, and it will become plainly visible in the southwestern evening sky even to the most casual of observers by Thanksgiving.

Appearing as a brilliant silvery-white star-like object of magnitude -4.3, our sister planet will set almost four hours after the sun by Christmas Day. In fact, if the air is very clear and the sky a clean, deep blue, you might try looking for Venus shortly before sunset. As the sky darkens, it will seem to swell from a tiny white spark to a big, almost dazzling Christmas-season star.

During the winter of 2017, Venus will perform like a sequined showgirl, calling attention to herself each evening. Viewed in the western twilight, this planet always appears dazzlingly bright to the unaided eye, and more so in binoculars. Venus reaches its greatest elongation — its greatest angular distance — 47 degrees to the east of the sun on Jan. 12. It will appear at its brightest in midwinter as it heads back down toward the sun, reaching its greatest brilliancy for this apparition on Feb. 15 at magnitude -4.6. The planet will be most striking then; it will shine nearly twice as bright as it does now. Venus will then slide back toward the glare of the sun, but because it will appear to pass more than 8 degrees north of it when it passes inferior conjunction on March 25, a most unusual circumstance will take place for a few days around that time: Venus will be visible as both an evening and morning object, glowing low in the west right after sunset and also low in the east just before sunrise. It finally — almost reluctantly — will vanish for evening viewers by the end of March. [Best Telescopes for the Money - 2016 Reviews and Guide]

Between now and the end of March, repeated observation of Venus with a small telescope will show nearly a complete range of its phases and disk sizes. Currently, the planet appears almost full (96 percent sunlit on Aug. 1), and through the first half of the upcoming fall season will display nothing more than a tiny, dazzling gibbous disk. It will start becoming noticeably less gibbous by early December. In mid-January 2017, Venus reaches dichotomy (displaying a "half-moon" shape). Then, during February, it shows us an increasingly large crescent phase as it swings toward Earth. Indeed, those using telescopes will note that while the Earth-Venus distance is lessening, the apparent size of Venus' disk will grow, doubling from its present size by Christmas Eve. When it has doubled again in size on Feb. 19, its large crescent shape should be easily discernable even in steadily held 7-power binoculars.

But even after it passes through inferior conjunction on March 25, our Venus show will not yet be over, for it will dramatically reappear as a dazzling "morning star" low in the eastern sky at the beginning of April. Then a repeat performance will begin, with the evening sequence of events happening in reverse, continuing right to the end of 2017.

Editor's note: If you snap an awesome photo of the moon that you'd like to share with Space.com and our news partners for a potential story or gallery, send images and comments in to managing editor Tariq Malik at spacephotos@space.com.