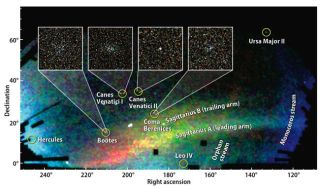 Researchers from the Sloan Digital Sky Survey (SDSS-II) announced the discovery of eight new dwarf galaxies, seven of them satellites orbiting the Milky Way. They resemble systems cannibalized by the Milky Way billions of years ago and help close the gap between the observed number of dwarf satellites and theoretical predictions.
(Image: © Vasily Belokurov, SDSS-II, Astronomy magazine, Kalmbach Publishing Co.)

A recent sky survey has turned upeight new members in our Local Group of galaxies,including a new class of ultra-faint "hobbit" galaxies and what mightbe the smallest galaxy ever discovered.

The Local Group is a collection ofabout 40 galaxies, of which the MilkyWay and Andromeda are the dominant members. The rest of the galaxies are mostly small satellitesknown as "dwarfgalaxies" that are gravitationally bound tothese two galaxies. The Large and Small MagellanicClouds are two of the Milky Way's betterknown dwarf galaxies.

The new galaxies [image]were detected over the past two years as part of the Sloan Digital Sky Survey(SDSS-II) and presented last week at the 209th meeting of the AmericanAstronomical Society in Seattle.

Seven of the new galaxiesare gravitationally bound to the Milky Way,while the eighth appears to float freely in space, beyond our galaxy's grasp.

The new Local Group members are evensmaller and fainter than other known dwarf galaxies, with luminosities rangingfrom only a thousand to at most a few hundred thousand times that of our Sun.

"They seem to be much fainter thananyone suspected galaxies could be before," said study team member Daniel Zuckerof Cambridge University. "So rather than dwarf galaxies, weshould perhaps call them 'hobbit galaxies.'"

The dimness could be the result ofstellar age, as seven of the new galaxies contain mostly old stars.Of these seven, two are located in the constellation Canes Venatici,one in Bootes,one in Leo,one in Coma Berenices,one in Ursa Major and one in Hercules.

The eighth and most recently spottedgalaxy is in many ways the most interesting. Dubbed Leo T, it is located about1.4 million light-years away from Earth,so far away that it floats freely in space, unperturbed by the Milky Way.

Unlike the other hobbit galaxies,Leo T includes both old and young stars. It also contains large amounts ofneutral hydrogen gas--a prime ingredient of starformation--suggesting it is still an activestellar nursery.

Because of its great distance, Leo T [image]is also the dimmest of the new hobbits. "This is basically the smallest,faintest star-forming galaxy known, by orders of magnitude," Zucker said.

Current galaxyformation theories predict our Milky Way shouldbe surrounded by a swarm of smaller satellite galaxies. But until the newsurvey, only twelve had been identified. Astronomers have dubbed this issue the"missing satellite problem."

The new galaxies could go a long waytoward solving this problem and might represent just the tip of a cosmiciceberg, the researchers say.

"The Sloan Digital Sky Survey coversonly a fifth of the night sky, so there must be many more dwarfs out there,"said study team member Wyn Evans, also of Cambridge University.

MilkyWay vs. Andromeda: Study Settles Which Is More Massive