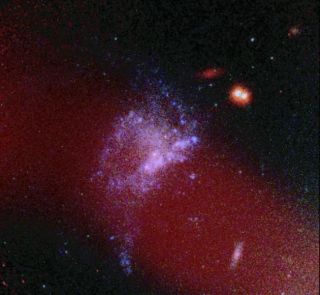 New observations portray black holes as Jekyll and Hyde characters. They can be creators as well as destroyers.

The classic view of black holes conjures images of gas and stars and even light being swallowed. That's why they're black. But when black holes feed, they create powerful high-speed jets that race at nearly light-speed into surrounding space.

Like a jolt of electricity breathing life into Frankenstein's monster, a black hole's jets can ignite star formation.

Wil van Breugel and Steve Croft of the Lawrence Livermore National Laboratory studied one of these jets slicing through a puzzling region of intense star formation known as Minkowski's Object. The jet, they say, caused a dense gas cloud to collapse and trigger the star birth.

The finding meshes nicely with a growing body of evidence suggesting black holes are integral players in galaxy formation.

"Some 20 years ago this kind of thinking was thought to be science fiction," van Breugel said. "It brings poetic justice to black holes because we think of them as sucking things in, but we've shown that when a jet emits from a black hole, it can bring new life by collapsing clouds and creating new stars."

Minkowski's Object is near a galaxy known as NGC 541. The galaxy's central black hole acts like a giant dynamo, accelerating globs of superheated matter and shooting them out along the axis of rotation. The jets are invisible, but astronomers have detected them with radio telescopes.

In a telephone interview, Croft explained what's going on.

The radio jet plows into a cloud of nearby gas in a supersonic shock wave, compressing and heating the gas. Gas in the cloud becomes ionized, meaning the atoms have lost electrons. After the shock passes, the ions recombine, creating radiation, which transports energy out of the cloud, Croft explained.

The cooling causes the cloud to contract still further, and when a knot of gas becomes dense enough, it can collapse to form a star.

It is not clear how big a role all this plays in galaxy formation. Stars can form without a radio jet around to shock a cloud. Exploding stars known as supernovas, for example, can trigger new star formation.

Most large galaxies have a central black hole, and often they emit jets of high-speed material.

In the first few billion years after the Big Bang, when things were more crowded and chaotic, black hole jets probably triggered star formation in many nascent galleries, the researchers now believe.

"In the early universe this process may be important because the galaxies are still young, with lots of hydrogen gas but few stars, and the black holes are more active," van Breugel said.

Observations for the study were made with the National Radio Astronomy Observatory's Very Large Array, the Keck telescopes in Hawaii and the Hubble Space Telescope. The study was presented last month at a meeting of the American Astronomical Society.