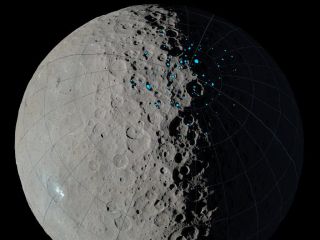 On the surface of the dwarf planet Ceres, certain regions could be cold enough to host long-lasting deposits of water ice, a rarely seen phenomenon on objects similar to Ceres, a new study shows.

Investigators using data from NASA's Dawn mission — which has been orbiting Ceres since March 2015 — identified dozens of zones in the dwarf planet's northern hemisphere that could host water ice for a billion years, according to a statement from NASA. These so-called "cold traps" occupy a small region, less than 1 percent the hemisphere's size, and totaling roughly 695 square miles (1,800 square kilometers). That's about two-thirds the land area of Rhode Island. You can see a video explaining the discovery here.

If ice is found in these areas, it would put Ceres in a select group of large solar system bodies with tenuous-atmospheres that have known long-lasting deposits of water ice. In recent years, NASA missions also found permanently shadowed craters containing ice on the planet Mercury and on Earth's moon. The European Space Agency's Rosetta mission also found water ice on the much smaller Comet 67P/Churyumov–Gerasimenko, although the mission scientists said that the comet's elongated orbit around the sun makes it unlikely that the surface ice is long-lasting. [Meet the Solar System's Dwarf Planets]

"The conditions on Ceres are right for accumulating deposits of water ice," said Norbert Schorghofer, a Dawn guest investigator at the University of Hawaii at Manoa, in a statement from NASA. "Ceres has just enough mass to hold on to water molecules, and the permanently shadowed regions we identified are extremely cold — colder than most that exist on the moon or Mercury."

The shadowy spots on Ceres tend to be on crater floors, or in crater areas facing toward the dwarf planet's north pole. While some indirect sunlight falls in these regions, ice could accumulate if the temperature stays below minus 240 Fahrenheit (minus 151 Celsius). The new study is the first time these "cold traps," have been found on Ceres, the statement said.

To find out what proportion of Ceres receives direct sunlight, researchers then fed the 3D maps into a computer model developed at NASA's Goddard Space Flight Center in Maryland. The model predicts how much solar radiation strikes the surface, and how conditions change during a year on Ceres (1,682 Earth days).

Mercury and Ceres share a similar percentage of land area that's capable of trapping water ice, and the two bodies likely also accumulate water ice at the same rate, the statement said. It's estimated that one out of every 1,000 molecules generated on Ceres' surface will move to a cold trap within a year on the dwarf planet. At this rate, ice deposits on Ceres would build up to a detectable level in about 100,000 years.

The findings were published on July 6 in Geophysical Research Letters.