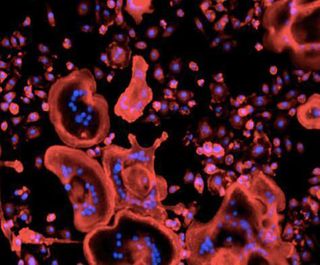 A bone cell research project is among the 2,200 lbs. (1,000 kilograms) of research and science supplies flying to the International Space Station on SpaceX's Dragon spacecraft July 18, 2016.
(Image: © NASA)

The six crewmembers on the station have been preparing for the supply ship's arrival early on Wednesday, July 20, when NASA astronaut (and current space station commander) Jeff Williams will grapple the craft with the space station's 57.7-foot (17.6-meter) robotic arm. A Russian Progress supply craft will have arrived at the station Monday night, as well. You can watch both launches and dockings live here, courtesy of NASA TV.

Then, once the craft is berthed to the space station, the real work will begin: Over the next five weeks, the station crew will unload its provisions, including more than 2,200 lbs. (1,000 kilograms) of research supplies and science experiments. [Related: Vital New Docking Port Launching on SpaceX Dragon]

One experiment won't take up a lot of space, but it has the potential to be a huge research boon to the orbiting lab — the space station's first DNA sequencer, which is about the size of a "fun-size Snickers bar," said Sarah Wallace, a microbiologist at Johnson Space Center (JSC) in Houston.

At a news briefing Wednesday (July 13), Wallace discussed how real-time DNA sequencing could help identify disease and assess crew health on the space station — and even, someday, analyze DNA-based life elsewhere in the universe.

For now, though, they're just testing the technology by sequencing DNA from a virus, a microorganism and a mouse. Parallel experiments will be run on the ground, as a control, and also in NASA's NEEMO laboratory on the ocean floor off the coast of Key Largo. The aquanauts there will also use the sequencer to identify microorganisms that inhabit the base.

"We wanted to include the mouse in there so that people would understand it wouldn't just be microbes that this could potentially give us a lot of information on," Wallace said. "It's really, we believe, going to be a game changer to have this capability on the ISS, and we're really excited for all the research potential that could come."

The astronauts will also be bringing aboard live heart cells, which they will cultivate for one month to test for changes in their sizes, shapes and beating patterns.

"It's been pretty well-established that the human heart as a whole undergoes some structural changes in response to a microgravity environment, so it actually assumes more of a spherical-like shape — and this is something that actually reverts back to normal when an astronaut returns planetside," Arun Sharma, a graduate student at Stanford University, said at the briefing. "But one thing that hasn't really been examined as well is the effect of microgravity on single heart cells, or the individual beating cells that comprise the entire human heart."

To obtain the heart cells that were destined for orbit, scientists transformed human skin cells into stem cells, which can become any cell, and then grew them into heart cells. After flying in space, they'll be compared with ground samples to see how their gene expression has changed.

Another experiment that investigates bone loss in space will test some technology that could potentially save researchers from sending similar experiments aloft: It will compare changes in bone cells that have been flown to space with ones that got the zero-g experience on Earth, levitated magnetically in a microgravity simulator.

If the microgravity simulator provides a close-enough match, scientists would be able to carry out many more studies on Earth, without having to contend with the difficulty and expense of sending everything into space.

"When you're doing experiments on Earth that simulate microgravity, you're in a much better-controlled environment," Bruce Hammer, a researcher at the University of Minnesota's Center for Magnetic Resonance Research, said at the briefing.

Researchers can run multiple iterations of the experiment and analyze more samples, which yields better data, and it also gives you an extra step to make sure you succeed in space: "Doing the magnetic levitation at our laboratory helps us vet experiments prior to committing to low-Earth orbit experiments, which are expensive and logistically difficult to carry out. Ultimately, you do want to do these experiments in a microgravity environment." [The Human Body in Space: 6 Weird Facts]

In addition to sending up those heart and bone cells, plus some tomato seeds that will be grown in schools once they return to Earth, the spacecraft is bringing another strange visitor: microbes that emerged after the Chernobyl nuclear reactor, located in Ukraine, melted down catastrophically in 1986.

"This is a unique experiment, in that these microbes actually popped up right after the nuclear accident, so they grew out of that heavy radiation environment," Camille Alleyne, an associate space station program scientist at JSC, said at the briefing. "Putting them in microgravity and seeing how the effect of that environment affects them can actually inform therapies for radiation treatment."

Researchers are also sending up a demo of a phase-change material heat exchanger, which will test wax-based and water-based substances that can melt and freeze as the temperature outside a spacecraft changes, absorbing excess heat and re-releasing it to keep the craft warm as it orbits in and out of Earth's shadow, going from blazing heat to chilling cold. They're also testing a receiver that will track ships on the ocean, computer processors to stick outside the station and check for radiation-related errors, and a more efficient solar cell.

And in the spacecraft's trunk, they'll carry the first of two docking adapters that will let commercial spacecraft automatically dock with the station to one day deliver crew and supplies.

Astronauts' days are split between maintenance (and occasional spacewalks), exercise and running the station's 250-plus experiments, but it will likely take some time before they unload all these new experiments and get the chance to run them. But when they do, they have a secret weapon who is accustomed to high-precision lab work: new astronaut Kate Rubins, who arrived in space July 9. Rubins is a microbiologist, and she served as part of the DNA sequencer's science team that designed the experiment's scope.

"Because she's been so involved, she's worked with us, she's had the hardware in her hands, she's put a lot of thought into it, and we really do think that's going to benefit us," Wallace said. "Of course, our goal is that any crewmember could operate this, but I think that life sciences as a whole is going to get a wealth of information getting feedback from Kate on all the various experiments she does while she's up there."