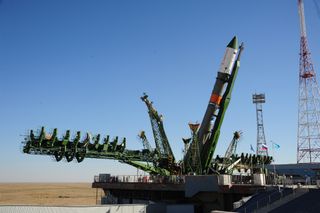 The Russian cargo ship Progress 64 and its Soyuz rocket are raised into launch position ahead of their planned July 16, 2016 launch from Baikonur Cosmodrome, Kazakhstan. Progress 64 is carrying 3 tons of supplies for the International Space Station.
(Image: © RSC Energia)

It's a doubleheader of cosmic proportions: This weekend, not one but two rockets are launching cargo missions to the International Space Station (ISS), and you can watch the action live online, thanks to NASA.

First, here's what's flying and when: On Saturday, July 16, an uncrewed Russian Progress 64 cargo ship will launch at 5:41 p.m. EDT (2141 GMT) from Kazakhstan's Baikonur Cosmodrome to deliver 3 tons (2.7 metric tons) of supplies to the space station.

Two days later (on Monday, July 18), the private company SpaceX will launch its own mission, with a Falcon 9 rocket and robotic Dragon capsule lifting off from Florida's Cape Canaveral Air Force Station. That mission will launch at 12:45 a.m. EDT (0445 GMT) on Monday to deliver even more supplies for the station's six-person crew. You can watch both rocket launches live online here, courtesy of NASA TV.

The action begins in earnest on Saturday at 2 p.m. EDT (1800 GMT), when NASA and SpaceX will hold a prelaunch press conference for the upcoming Dragon resupply mission. Called CRS-9 (short for Commercial Resupply Services 9), the Dragon mission is SpaceX's ninth commercial cargo mission for NASA under a contract worth a total of $3.1 billion for up to 20 flights.

During the prelaunch briefing, SpaceX and NASA officials will discuss the supplies launching on Dragon for CRS-9, their importance for the space station's operations and the weather forecast for the upcoming launch. SpaceX representatives may also discuss whether the company aims to make a landing attempt for its Falcon 9 rocket after delivering Dragon into orbit. The company has made several landings on an ocean barge this year, and maintains a land-based landing pad near its Cape Canaveral launch site.

Progress 64 is a robotic cargo ship ferrying 3 tons of supplies to the space station for the Russian Federal Space Agency, Roscosmos. Progress vehicles look similar to Russia's crew-carrying Soyuz spacecraft, but instead of a crew capsule, the automated cargo ships carry propellant for the space station's thrusters.

Progress 64 will take two days to reach the International Space Station after launch. The rocket's flight profile calls for 34 orbits of Earth before arriving late Monday night, at 8:22 p.m. EDT (0022 GMT). That means SpaceX's Dragon will launch (liftoff is set for 12:45 a.m. EDT on Monday, if you recall) while Progress 64 is still en route to the space station, resulting in a sort of cosmic traffic jam.

NASA's webcast for the SpaceX Dragon launch will begin Sunday night, at 11:30 p.m. EDT (0330 GMT), and run through the flight itself. If all goes well, NASA and SpaceX plan to hold a post-launch press conference at 2 a.m. EDT (0600 GMT).

Monday is the marathon day of the rocket-launch schedule. The day starts with the SpaceX launch and will end with Progress 64's arrival at the space station.

NASA's webcast for the docking coverage will begin at 7:30 p.m. EDT (2330 GMT) and run through spacecraft contact and capture. Progress 64 will dock at the space station's Russian-built Pirs docking compartment and will remain attached to the orbiting lab for six months. It is due to depart the station in mid-January 2017 and will be disposed of when it burns up in Earth's atmosphere.

SpaceX's Dragon space capsule, however, will return to Earth sooner if its mission launches as planned. Given a Monday launch, Dragon is due to arrive at the space station early on Wednesday, July 20 (that's also the anniversary of the 1969Apollo 11 moon landing). The NASA webcast for Dragon's arrival will begin at 5:30 a.m. EDT (0930 GMT). The capsule is expected to take more than 4 hours to park safely.

Dragon will remain at the station for five weeks and then return to Earth on Aug. 29. The capsule is equipped with a protective heat shield and parachutes that will allow it to splash down in Pacific Ocean off the coast of Baja California. While SpaceX is not the only commercial company with a NASA contract to deliver station cargo (Orbital ATK also has one), Dragon is the only vehicle currently capable of returning complete experiments and other gear to Earth for further study.

And that will do it! Whew! That's a lot of spaceflight action crammed into a weekend and early next week, but they should be an exciting few days for space fans.

Visit Space.com's space webcast page throughout this weekend and in the early part of next week to watch the Progress 64 and SpaceX Dragon deliveries to the space station.