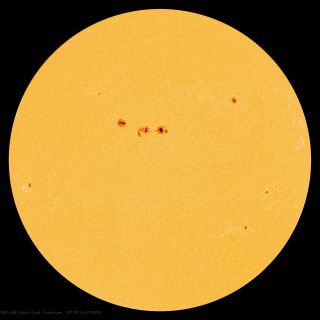 The powerful loops of magnetic fields behind sunspots rise to the surface of the sun much more slowly than previously thought, a new study finds.

This finding suggests that the theory concerning the origins of these strongly magnetic regions, which can lead to storms of particles striking the Earth, should include churning that happens thousands of miles below the surface of the sun, researchers said.

Sunspots are dark, cooler areas on the surface of the sun that are on average as wide as Earth. They are linked with eruptions of charged particles that generate beautiful auroras on Earth, but they can also ravage electronics in space and zap power grids on the planet's surface. [Photos: Sunspots on Earth's Closest Star]

Sunspots are dominated by intense magnetic fields within so-called "active regions." These powerful magnetic fields suppress churning or convection of superheated matter in the sun, which is why sunspots are cooler and darker than their surroundings.

To learn more about the origins of magnetic flux tubes, scientists analyzed data collected by NASA's Solar Dynamics Observatory (SDO) spacecraft, focusing on 70 active regions and the moment of their emergence. The sun's activity had reached an ebb in 2010, when SDO was launched, so the researchers had to collect magnetic data from the sun for more than two years to wait for solar activity to increase.

The researchers also ran numerical simulations of solar magnetic activity. These computationally demanding simulations, performed on NASA supercomputers, are significantly more realistic than previous work, and the hardware and software for them only recently became available, the scientists said.

The SDO data helped the scientists measure flows of plasma on the surface of the sun that were linked with emerging active regions. The computer simulations revealed that the strength of these flows increased with the upward speed of rising magnetic flux tubes.

Surprisingly, the researchers found that magnetic flux tubes rise up from the solar interior at speeds of no more than about 335 mph (540 km/h) from about 12,400 miles (20,000 kilometers) below the sun's surface. Previous research suggested that magnetic flux tubes rose up at speeds of about 1,120 mph (1,800 km/h) and then accelerated rapidly as they approached the sun's surface.

The slower speeds that the researchers found match the kind of speeds at which plasma flows within the sun's convective zone, deep below the sun's surface. This suggests that solar convection must play a key role in the emergence of magnetic flux tubes and thus active regions, the scientists said.

"The most important implication is that theory of the origin of active regions needs to be broadened to include the effects of subsurface convection, even at depths below 20,000 kilometers (12,400 miles)," study lead author Aaron Birch, a solar physicist at the Max Planck Institute for Solar System Research in Göttingen, Germany, told Space.com. "Understanding the formation of active regions will presumably help us understand the origin of solar activity, which controls solar weather."

The researchers are currently looking at a wider range of numerical simulations to see which models might best match the observations. They also would like to look at how active regions differ from one another, Birch said.

The scientists detailed their findings online July 13 in the journal Science Advances.