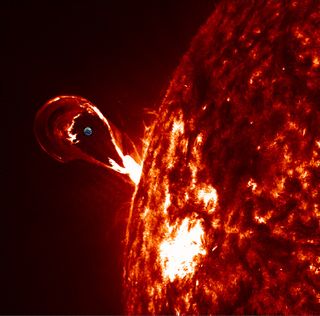 Eruptions on the sun's surface are probably caused by giant, unstable magnetic plasma arches, a new study reports — a discovery that brings scientists one step closer to predicting solar outbursts that can wreak havoc on Earth.

Astronomers have long observed gigantic arches of plasma emerging from the surface of the sun. Known as magnetic flux ropes, coronal loops and solar prominences, these structures possess spiraling magnetic field lines, as if a huge bar magnet had been twisted into a corkscrew. A vast amount of electric current typically runs through the core of each of these tubes.

It has proven difficult to know which of these models more closely depicts reality, because understanding the 3D nature of the magnetic field of the sun's outer atmosphere, or corona, is a big challenge.

"It was a controversial issue for a relatively long time," said lead study author Tahar Amari, an astrophysicist at the Polytechnic School in Palaiseau, France.

Using data from a four-day period preceding a CME in December 2006, the researchers developed a model of the solar coronal magnetic field. They found that in the days before the eruption, the magnetic energy was low, but it slowly increased over time. On the day before the eruption, a magnetic flux rope formed and grew. When the magnetic energy grew too high, the rope was squeezed upward at speeds of up to 8.9 million mph (14.4 million km/h), and the subsequent reconnection drove the CME.

"It was very exciting seeing the eruption form in our model, seeing it evolve in such a sudden way," Amari told Space.com. "I would not have dreamed of seeing it."

"The issue is that the other model needs a very complex solar environment, so there's a question of whether it could happen," Amari said. "Also,

there's a question of whether you could create a major solar eruption with the other model — you can with our model, because a magnetic flux rope can store a lot of energy."

These findings could help astronomers predict future CMEs, Amari said. "We can monitor active regions for days before an eruption occurs — maybe say if one might occur one day before it happens, and maybe in the future say whether it will be a large eruption or a small eruption," he noted.

In the future, Amari and his colleagues hope to better understand what happens deeper in the sun when an eruption occurs, and to model how magnetic flux ropes ultimately impact the Earth.

The scientists detailed their findings online today (Oct. 22) in the journal Nature.