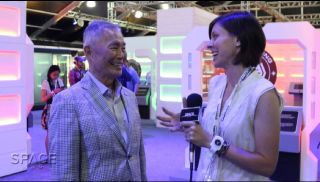 NEW YORK — It was a magical moment for one space nerd: I talked with actor George Takei at the opening of a "Star-Trek"-themed museum exhibit here in New York City.

Best known for playing Hikaru Sulu in the original "Star Trek" TV series and movies, Takei's sense of humor and joyful personality have made him a favorite guest on talk shows for years. More recently, his popularity has grown even further, thanks to his active online presence and outspokenness about social issues.

I spoke to Takei at the opening of "Star Trek: The Starfleet Academy Experience" at the Intrepid Sea, Air and Space Museum in New York. He talked about how "Star Trek" can inspire young people to discover new frontiers in technology and space exploration, and chatted about the Juno probe's recent arrival in the Jupiter system. He also mentioned his upcoming trip on a zero-gravity airplane, aka a "Vomit Comet." [The Starfleet Academy Experience: Inside the Intrepid 'Star Trek' Exhibit (Photos)]

In the "Star Trek" universe, Starfleet is the multiworld, democratic organization where most of the well-known Trek heroes are trained. In the new museum exhibit, visitors go through Starfleet training, and are eventually assigned to a particular department (such as "science" or "communications") based on their strengths and preferences. I asked Takei if, while visiting the exhibit, he felt like he'd been transported back to the USS Enterprise (the central ship in the original TV series).

"I certainly feel like I've been transported to a futuristic-looking museum exhibit," Takei said. "It's very well done."

He added that the style was more reminiscent of the later TV series "Star Trek: The Next Generation" than the original series.

Not all actors known for science-fiction roles are actually science-fiction buffs, but Takei seemed to be a genuine fan of space exploration. He mentioned the Juno probe's pending arrival at Jupiter (it has since successfully entered into orbit around the giant planet) and the mock Mars missions that are taking place in Hawaii. In those mock missions, groups of participants live together for months at a time, isolated from the outside world except for digital correspondence, in order to study the psychological and social effects of a mission to Mars.

"We're also now imagining the possibility of one of us on Mars, and what's the challenge of that … How do you keep your humanity?" he said.

Takei also told Space.com that he's taking a trip on a zero-gravity airplane similar to NASA's famed "Vomit Comet." The flight is slated for Aug. 4 in Las Vegas and operated by Zero Gravity Corp. The airplane flies in a parabola shape, which lets passengers experience brief stints of weightlessness, without actually going into space. (The flight path is sort of like the moment a roller coaster goes over a hill and you fly upward in your seat.)

While Takei is not a real space explorer, he does try to use his connection to "Star Trek" to inspire people to look to the future and push the limits of science.

"We live in a science-fiction world," Takei said — even compared to the futuristic world envisioned in 1966, the year the original "Star Trek" TV series debuted. Technologies that seemed futuristic then (like the chordless "communicator," which was essentially a voice-only cellphone) seem simple compared to real-world modern technology.

"We are animals of imagination and innovation and invention," Takei continued. "We create our future. It's us that do it. It's not something that happens by magic. … We imagine the unimagined — way out there in space — and that becomes an inspiration to today's scientists."