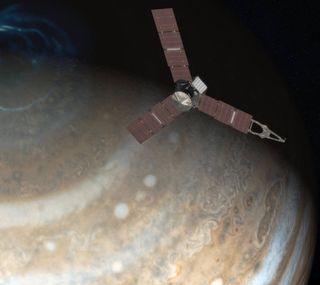 PASADENA, California — For the second time ever, a spacecraft has slipped into orbit around huge and mysterious Jupiter.

The milestone came late tonight, as Juno fired its main engine in a crucial 35-minute burn that slowed the probe enough to be captured by Jupiter's powerful gravity. That burn started at 11:18 p.m. EDT (0318 GMT Tuesday) and ended on schedule at 11:53 p.m. [Photos: NASA's Juno Mission to Jupiter]

In the hours leading up to the engine burn, that same gravity had accelerated Juno to an estimated 165,000 mph (265,000 km/h) relative to Earth — faster than any human-made object has ever traveled, mission team members have said.

Tonight's orbit-insertion burn, which Juno performed on autopilot, was a make-or-break maneuver: If anything had gone seriously wrong, Juno would have gone sailing right past Jupiter, and the science goals of the $1.1 billion mission — which including mapping the planet's gravitational and magnetic fields and characterizing its composition and interior structure — would have gone unaccomplished.

So the jubilation that erupted at Juno mission control here at NASA's Jet Propulsion Laboratory (JPL) — shouts of joy, high-fiving and hugging among team members — made a lot of sense.

"Welcome to Jupiter!" a mission commentator announced just after the burn ended, eliciting a second round of cheers and then, a few moments later, a standing ovation.

"It feels great — this is phenomenal!" Geoff Yoder, acting Associate Administrator for NASA's Science Mission Directorate, said when the celebration died down.

Juno launched in August 2011 and took a circuitous route through the solar system, looping back to make a speed-boosting flyby of Earth in October 2013.

Juno notched more than just the all-time speed record during its long trek. This past January, the probe became the farthest-flung solar-powered spacecraft in history, zooming past the record of 492 million miles (792 million kilometers) from the sun, which had been held by the European Space Agency's comet-chasing Rosetta mission.

Jupiter lies five times farther from the sun than Earth does, and as a result receives 25 times less sunlight than our home planet gets. To harness that meager supply, Juno sports a total of 18,698 individual solar cells, which are spread among three 29.5-foot-long (9 meters) panels.

With these panels extended, Juno is about the size of a basketball court.

Gathering enough energy to operate is far from the only challenge Juno faces at Jupiter. For example, the area around the giant planet is the most intense radiation environment in the solar system, mission team members have said.

Jupiter's magnetic field, which is 20,000 times stronger than that of Earth, accelerates huge swarms of electrons to nearly the speed of light.

"Once these electrons hit a spacecraft, they immediately begin to ricochet and release energy, creating secondary photons and particles, which then ricochet," Heidi Becker, leader of Juno’s radiation-monitoring team, said during a news conference on June 16. "It's like a spray of radiation bullets." [Juno's Dangerous Plunge Into Jupiter Orbit (Video)]

Juno's flight computer and other sensitive electronics are encased in a 400-lb. (180 kilograms) titanium vault to protect them against this barrage. The spacecraft's scientific instruments also wear what Becker called "bulletproof vests," as does the star-tracking camera Juno uses for navigation.

Such precautions are necessary when dealing with the king of planets, which is so big that all of the other bodies in the solar system except the sun — all the planets, dwarf planets, comets and asteroids — could fit inside it.

"Jupiter is a planet on steroids," Juno principal investigator Scott Bolton, of the Southwest Research Institute in San Antonio, said during the same news conference. "Everything about it is extreme."

The plan called for Juno to be captured into a 53.5-day orbit around Jupiter tonight. Over the coming days and weeks, the probe's handlers will turn on, check out and begin using its nine science instruments.

The real scientific action, however, won't begin until October. On Oct. 19, Juno will perform another engine burn, which will move the spacecraft into its 14-day science orbit around Jupiter's poles. This path will be extremely elliptical; Juno will zoom to within 3,100 miles (5,000 km) of Jupiter's cloud tops at its closest approach and get all the way beyond the Jovian moon Callisto at its most distant point. (Callisto orbits about 1.2 million miles, or 1.9 million km, from Jupiter.)

This orbit was designed in part to minimize Juno's radiation exposure; the probe will dip under and fly beyond Jupiter's radiation belts for much of each 14-day-long lap, mission team members have said.

If all goes according to plan, Juno will perform about 30 such orbits, taking the measure of Jupiter in a variety of ways each time. For example, the spacecraft will study the planet's magnetic and gravitational fields in detail, measure the amount of water in Jupiter's atmosphere and determine whether or not a core of "heavy" elements (anything heavier than hydrogen and helium) lies beneath all those swirling clouds. [What's Inside Jupiter? Close Encounters With The Giant (Video)]

These latter two pieces of information will reveal a great deal about Jupiter's origins, mission team members have said.

For example, the presence of a rocky core would indicate that the planet coalesced after rocks and ices began forming in the early solar system, Bolton said. The lack of a core, on the other hand, would suggest that Jupiter came together earlier, via the gravitational collapse of a gas cloud, much like the sun did.

"It's probably the single most important number that Juno's going to bring back from Jupiter," Juno project scientist Steve Levin, of JPL, said during a June 30 news briefing.

Jupiter was the first planet in the solar system to form, so understanding the gas giant's origins is key to learning how planets, and planetary systems, take shape, Bolton said.

"What Juno's really about is learning about the recipe for how solar systems are made," he said during the June 30 news conference.

Something happened after the sun formed that allowed Jupiter to form, Bolton added.

"That first step eventually leads to us," he said. "And Juno's poised to be able to make some great progress in learning about that step."

Juno will also study Jupiter's auroras, the most powerful in the solar system, and take the best-ever pictures of the gas giant, Bolton said.

All of this work is scheduled to be done by February 2018, the end of Juno's science mission. But the probe will not linger in the Jupiter system; Juno's handlers will command it to dive into Jupiter's thick atmosphere, in a suicidal maneuver designed to ensure that no Earth microbes contaminate any Jovian moons.

NASA is particularly concerned about safeguarding Europa, an ocean-harboring Jupiter satellite that many researchers regard as the solar system's best bet to host alien life. NASA is developing a mission to investigate Europa's life-harboring potential; this as-yet-unnamed mission is currently scheduled to launch sometime in the 2020s.