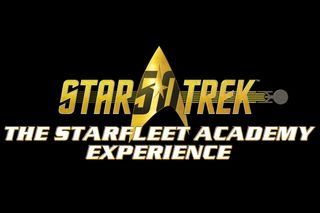 "Star Trek: The Starfleet Academy Experience" is coming to museums in North American in 2016.
(Image: © Startrek.com)

The exhibit, which will fill a 10,000-square-foot (930 square meters) space in the museum, celebrates the 50th anniversary of the famed space franchise and will include props, costumes and technology (such as a medical tricorder table or planet projection mapping). Exact dates for the New York City appearance of Starfleet Academy have not been released.

"The exhibition offers visitors the chance to experience life as a Starfleet Academy cadet as they attend the Academy's Career Day in the 26th century," museum officials wrote in a statement.

Produced by EMS Entertainment, the exhibit will open at the Canada Aviation and Space Museum (CASM) in Ottawa, Ontario, on May 26, before coming to the Intrepid Museum in New York and later touring other museums in the U.S.

"After student orientation, cadets will visit nine zones focused on the training center's specialties: language, medical, navigation, engineering, command and science," the statement said. "Following these interactions, cadets will be assigned a specialty and a demeanor based on their individual training."

2016 marks the 50th anniversary of the debut of the original "Star Trek" series. A new "Star Trek" film is coming to theaters this year, and the franchise already includes six TV series and 13 feature films, not to mention a number of fan-produced productions.

The Intrepid Museum will host many "Star Trek"-themed events this year, including movie nights, educational programs and astronomy events. Check the museum's calendar for a complete list. In addition, New York City "Star Trek" fans can also attend the 50th anniversary convention at the Javits Center from Sept. 2 to Sept. 4.