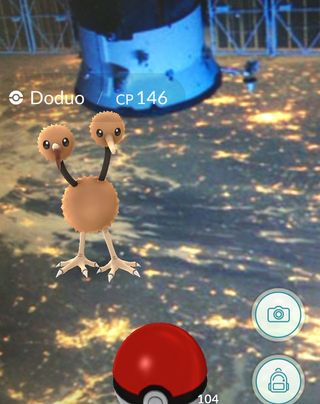 As people wandered our office halls, hunting tiny monsters with the newly released augmented-reality game "Pokémon Go," Space.com had only one question: Can astronauts play it in space?

We know that NASA astronauts have internet access on the International Space Station (ISS), and that they have smartphones to use as part of experiments, such as the station-traversing SPHERES robots (Synchronized Position Hold, Engage, Reorient, Experimental Satellites). And they have an "Angry Birds" plush doll. But it was unclear whether those devices could access the station's on-board internet or make use of apps. We had a few guesses but decided to take the question straight to the source.

"Short answer is no, it is not possible for the astronauts to play," NASA spokesman Dan Huot told Space.com in an email. The smartphones and tablets on the space station don't have internet connectivity, and apps can't be added to them. [Aliens Attack! Space Station Astronauts Fight VR Invasion with HoloLens]

Although that answer did not surprise us, we kept wondering: If astronauts could access the internet through those devices, what would the "Pokémon Go" experience be like?

"Pokémon Go," based on the popular Nintendo franchise, lets players capture a variety of cartoon critters as they move around the "real world." During their travels, players are prompted to peer through their smartphones to catch Pokémon superimposed on their surroundings as captured by the phone's camera.

The game relies on Google Maps to identify users' locations and their proximity to PokeStops and gyms — which are tied to real-world landmarks — where they can get items and fight.

And so there's a hint about what the experience would be like for astronauts, if smartphones on the space station were able to connect. The space station accesses the internet through computers down at NASA's Johnson Space Center in Houston. So rather than streaking across the Earth at more than 5 miles per second (8 kilometers per second) — thus circling Earth every 90 minutes, which is definitely too fast to hatch Pokémon eggs — astronauts' "Pokémon Go" avatars would be stuck in one spot in Houston: wherever that particular Internet Protocol (IP) address shows up on Google Maps.

Hopefully, there'd be a PokeStop near that spot, or the astronauts would soon run out of Poke Balls to catch visitors to their starry surroundings. (Maybe NASA would splurge and let them buy a few from the in-game store.)

In reality, "astronauts use ISS internal GPS data and custom applications to determine their location and position," Huot said. "Location-based services we use here on Earth are not utilized."

While "Pokémon Go" is probably not in the cards for the station's six spacefarers, they have plenty to do in between exercise, experiments and spacewalks to stay in contact with the outside world. Astronauts can peruse the internet relayed through Houston, communicate by email and post on social media, and they can call down to phone numbers on Earth with a satellite IP phone. They also get the chance to video chat with their family back home once a week, NASA astronaut R. Shane Kimbrough said at a news conference last week.

"Our internet connection is actually a relatively new thing," NASA astronaut Tim Kopra said during a Facebook Live chat with Mark Zuckerberg from the space station in June. (Internet access was added for astronauts seven years ago.) "It's not quite the same speed, bandwidth that folks have down on the ground, but it's good enough, and it allows us to keep in touch with friends and family."

Space fliers who want to "catch them all" might be better off bringing a handheld system with one of the original Pokémon games instead — like the Russian cosmonaut who played a Nintendo Game Boy with Tetris to stay entertained during a 196-day stay on the space station Mir in 1993.