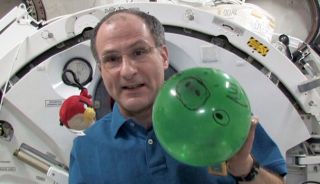 "Angry Birds Space," which will be released on iOS and Android, Mac and PC, animation, merchandise and book publishing on March 22, will hit appstores with 60 puzzling levels, new Angry Birds characters, superpowers and new gameplay.

And it's the first commercial game to be announced from space, thanks to NASA. The space agency and Rovio are partnering to teach students of all ages about physics and space exploration through the Angry Birds Space game. [Top 5 Games for iPhone 4]

"I want to do some physics demonstrations that involve some of the things that you might see in the Angry Birds game," Pettit said in the prerecorded video that NASA and Rovio released Thursday.

Don't ask about the eggs

Pettit is currently serving as a flight engineer on board the International Space Station (ISS) about 240 nautical miles above the surface of the Earth. For his physics demo, he borrowed a small red Angry Bird stuffed toy that some of his crewmates had brought to the station last year.

In the Angry Birds Space game, a giant claw kidnaps the birds' eggs. The Angry Birds then chase the claw into a wormhole and find themselves floating in a strange galaxy surrounded by space pigs.

For his real-life take on the game, Pettit made a makeshift pig by drawing a face on a green balloon.

"I'm not very good at art," admitted Pettit in the video. "It's a good thing I decided to be a scientist and an engineer instead of an artist 'cause I'd... I'd probably be starving by now."

He also released two real eggs to float aboard the station.

"Don't ask me how I got the eggs on space station," Pettit said.

Using a bungee cord that he spread across a hatchway, Pettit made a makeshift slingshot like the type used to launch the birds flying in the game. He pulled back and let the bird fly.

"Launching Red Bird into space," Pettit said. "Well hey, we're already in the space. Woo hoo! Look at that! Whoa, all the way down."

The set-up served as an example of a trajectory, which as Pettit said in the video is important for astronauts trying to plan their path when they launch on a rocket to the space station.

"And we got to see all of this in a weightless environment, which is what the Angry Birds Space game is going to be like with gravity fields from planetary bodies," he added.

Rovio has included in the game and on its a website a link to NASA's website, where the space agency offers more information about gravity and the effect it has on objects moving through space.

"Angry Birds Space has provided NASA an opportunity to share a core concept of space exploration: gravity," the space agency wrote on its website. "Not only does gravity play a vital role in the game but, in general, gravity is a force that governs motion throughout the universe."

Earlier versions of the Angry Birds game have used real world physics to control the motion of the birds. In Angry Birds Space, that now extends to orbital trajectories.

On some levels, players will have to take into account the effects of zero-gravity, while others will be influenced by the pull of planets. In a brief video preview, Rovio showed that some of the gameplay involves navigating the birds between moons and man-made (pig-made?) structures using gravity-assisted slingshot maneuvers.

"We focused on every detail in development of Angry Birds Space to build a special experience for our fans," Peter Vesterbacka, Rovio's chief marketing officer, said in a statement. "I believe we have succeeded well with the game."

"NASA has been the perfect partner for our Angry Birds Space program, and we can't wait to work with them on creating more compelling educational experiences," said Vesterbacka.

"This ongoing collaboration with Rovio and Angry Birds is an exciting way to get people engaged," NASA associate administrator for communication David Weaver said, "and get students energized about future careers in science and technology."

Pettit agreed in his message from space.

Click through to collectSPACE.com to watch an extended version of Don Pettit’s Angry Birds physics demonstration aboard the International Space Station.