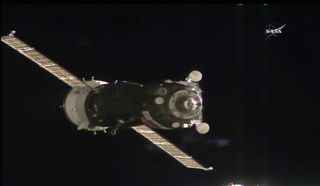 Three astronauts docked with the International Space Station early this morning (July 9) in an upgraded Russian Soyuz spacecraft, after a two-day journey from Earth spent testing out the new craft's systems.

"Docking confirmed," a NASA commentator said as the Soyuz linked up. "Three new crewmembers have arrived at the International Space Station after a perfect shakedown mission for this upgraded Soyuz vehicle."

The hatches between the Soyuz and the station opened at 2:26 a.m. EDT (0626 GMT), and shortly afterwards the spacefliers came inside to be greeted by the station's three current occupants. Then, the new arrivals had the chance to speak with their families on the ground. Both Rubins and Onishi are first-time space travelers.

During their two-day flight commanded by Ivanishin, the new crewmembers tested out the improved communications systems and thruster configuration on the Soyuz-MS spacecraft. They are the first humans to ride in the upgraded craft, which launches from Baikonur Cosmodrome in Kazakhstan.

As the Soyuz cruised toward the orbiting lab, NASA astronaut Jeff Williams, the space station's current commander; as well as Russian cosmonauts Oleg Skripochka and Alexey Ovchinin, were hard at work. According to NASA officials, yesterday, Williams installed lab gear for an incoming life-sciences experiment and configured a meteor-hunting observation rack brought up on a recent Cygnus supply-craft delivery.

The full Expedition 48 crew of six has a busy few months ahead — they are scheduled to receive and install an international docking adapter, which will provide automated docking for future crewed and uncrewed spacecraft, including planned Boeing and SpaceX missions to bring astronauts to the space station.

A SpaceX Dragon cargo craft will deliver that adaptor, and the crew will also see Orbital ATK's Cygnus spacecraft (on its Antares rocket's return-to-flight mission) and two Russian Progress spacecraft, all of which will bring additional supplies and gear.

The three new crewmembers are scheduled to remain on the station for about four months, and they will be joined toward the end of September by NASA astronaut Shane Kimbrough and Russian cosmonauts Andrey Borisenko and Sergey Ryzhikov.