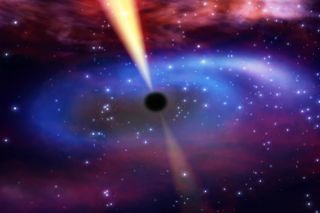 A star-guzzling black hole displays surprisingly still, compact jets, according to a new high-powered observation. This illustration shows what happens when a star comes too close to a supermassive black hole, resulting in a disk of gas and powerful jets blasting outward.
(Image: © ESA/S. Komossa/Beabudai Design)

After zooming in on a star being consumed by a supermassive black hole, scientists have discovered that a jet emanating from the system is moving much more slowly than expected. The team suggests that instead of wiggling around, the jet stays superstable because of the way the gas interacts with the surrounding environment.

The new research shows that when the gas from the jet hits the interstellar medium (the dust, gas and other small particles in between stars), the jet's gas decelerates quickly. It's a new insight into how these jets behave in space, the team said.

"We were able to measure the jet's position to a precision of 10 microarcseconds … These are some of the sharpest measurements ever made by [a] radio telescope," lead author Jun Yang, of the Onsala Space Observatory and the Chalmers University of Technology in Sweden, said in a statement. [The Strangest Black Holes in the Universe]

The jet comes from a source known as Swift J1644+57, a black hole swallowing a star 3.9 billion light-years from Earth that was discovered in 2011 with NASA's Swift space telescope.

When a supermassive black hole consumes a star, roughly half of the gas goes toward the black hole and creates a disk around it. Some of this material is then ejected into jets — narrow beams of particles that fly out at nearly the speed of light. The jets shine brightly in radio wavelengths, while the disk of gas is bright in many different wavelengths of light.

The researchers scrutinized Swift J1644+57 using the European Very Large Baseline Interferometry Network, a telescope network that spans multiple continents. Interferometry involves linking two or more telescopes so they act as one receiver. This allows for more sensitive measurements than would be possible with a single telescope. In the case of the European network, the interferometer is the size of Earth, allowing for extremely precise measurements.

For three years, the researchers examined the jet for motion close to the speed of light, called superluminal motion, which happens when the jet moves. The telescope network was sensitive enough to see this motion, but none was detected — the jet was strangely slow.

"Earlier studies suggest we may be seeing the jet at a very small angle," team member Zsolt Paragi, head of user support at the Joint Institute for VLBI ERIC in the Netherlands, said in the same statement. "That could contribute to the apparent compactness."

The results were presented Friday (July 8) at the European Week of Astronomy and Space Science in Athens, Greece, and they were also published in May in the journal Monthly Notices of the Royal Astronomical Society.