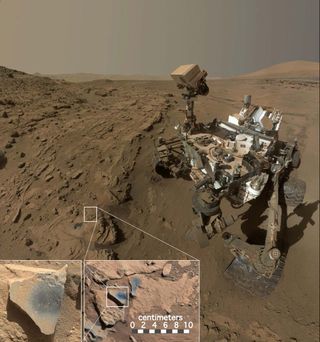 Ancient Mars was even more Earth-like than scientists had thought, a new study suggests.

NASA's Curiosity rover has detected high concentrations of manganese oxide minerals in Red Planet rocks, suggesting that the Martian atmosphere contained more oxygen billions of years ago than it does today, researchers said.

"The only ways on Earth that we know how to make these manganese materials involve atmospheric oxygen or microbes," study lead author Nina Lanza, a planetary scientist at Los Alamos National Laboratory in New Mexico, said in a statement. "Now we're seeing manganese oxides on Mars, and we're wondering how the heck these could have formed." [Latest Mars Photos by NASA's Curiosity Rover]

Since there's no evidence that life has ever existed on Mars, Lanza and her colleagues are leaning toward the atmospheric-oxygen explanation.

The Martian manganese oxides could have formed via the interaction of rock with liquid water in oxidizing conditions, Lanza said. Observations by Curiosity and other Mars spacecraft have shown that liquid water was abundant on Mars, at least in some places, billions of years ago.

But where did the atmospheric oxygen come from? Lanza and her colleagues speculate that the gas began building up shortly after Mars' global magnetic field shut down around 4.2 billion years ago.

The loss of the magnetic field led to the stripping of Mars' atmosphere (which was once quite dense but is now just 1 percent as thick as that of Earth at sea level) by the solar wind. Additionally, without this magnetic field, high-energy ionizing radiation could reach the Martian surface, researchers said.

This radiation then split many of the water molecules on the surface into their constituent hydrogen and oxygen atoms. The extremely light hydrogen zoomed off into space, but Mars' gravity held onto the heavier oxygen, which accumulated.

Then, over the past few billion years, the oxygen levels declined significantly, the idea goes. (Oxygen currently makes up just 0.1 percent of Mars' air, which is more than 95 percent carbon dioxide.)

"It's hard to confirm whether this scenario for Martian atmospheric oxygen actually occurred," Lanza said. "But it's important to note that this idea represents a departure in our understanding for how planetary atmospheres might become oxygenated."

In particular, the idea suggests that atmospheric oxygen is not a rock-solid "biosignature," or indicator of life, since high concentrations of the stuff can apparently accumulate via abiotic processes.

Curiosity landed inside Mars' 96-mile-wide (154 kilometers) Gale Crater in August 2012. The car-size rover detected the manganese oxides using its ChemCam instrument, which fires a laser at rocks and then analyzes the resulting vaporized bits.

The new study has been accepted for publication in the journal Geophysical Research Letters.