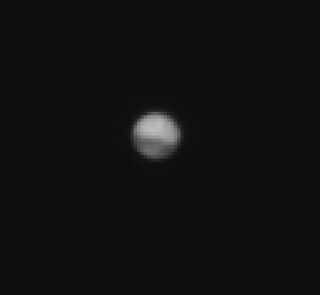 ExoMars' Trace Gas Orbiter took its first image of Mars on June 13, from about 25 million miles (41 million kilometers) away. The volcanic Tharsis region of Mars was facing the spacecraft at the time.
(Image: © ESA/Roscosmos/ExoMars/CaSSIS/UniBE)

The ExoMars mission has caught its first glimpse of the Red Planet. On June 13, the mission's Trace Gas Orbiter (TGO), currently on its way to Mars, took an image of the planet from 25 million miles (41 million kilometers) away, close enough for some light and dark patches on the planet to be visible.

The new images are just a start for ExoMars, which is jointly managed by the European Space Agency (ESA) and the Russian space agency, Roscosmos. Though some Earth-based observatories, such as the Hubble Space Telescope, can take better pictures of Mars, the TGO images confirm that the instruments are focused and working as predicted, ESA officials said in a statement. When TGO draws closer to the Red Planet, pictures from the mission will exceed the quality of those that can be captured by Earth-based telescopes by the second week of October, according to the statement.

TGO will do a course correction on July 28 and then enter orbit around Mars on Oct. 19. Its main mission is to search for gas sources on the planet's surface (such as volcanoes) and rare gases, particularly methane.

TGO will reach orbit on the same day that another piece of the ExoMars mission, called Schiaparelli, lands on the surface of the Red Planet. Schiaparelli's mission is to test entry, descent and landing technology for a future Mars rover.

Classifying Mars' methane sources has been a difficult task for scientists. Telescopes pointed at Mars have revealed wildly different measurements. Even NASA's Curiosity rover on the surface of Mars, which detected a one-time spike in methane for a few weeks in 2013 and 2014, later found that the spike was not linked to seasonal change. Methane can indicate biological activity (for example, from microbes) or geological activity from features such as volcanoes.

ExoMars will take place in two parts, with a rover following the TGO and Schiaparelli in 2020. ESA and Roscosmos agreed in May to push the second half of the mission back from 2018, citing technical delays and funding problems.