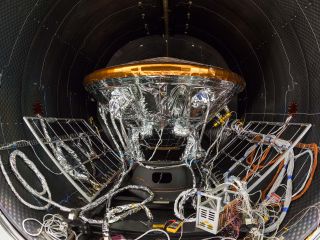 A model of ExoMars' Schiaparelli lander prepares for thermal tests in Cannes, France. The European Space Agency's Mars lander will hurtle to the planet's surface Oct. 19, and its heat shields will have to withstand about 2,732 degrees Fahrenheit (1,500 degrees Celsius).
(Image: © B. Bethge/ESA)

The ExoMars mission launching Monday (March 14) will pack an orbiter as well as an ambitious Mars lander prototype that will make the challenging descent to a controlled landing on Mars.

The little lander, called Schiaparelli, will demonstrate the technology necessary to land a life-hunting rover on ExoMars' next mission. It's about 1,320 pounds (600 kilograms) packed into a 7.9-foot (2.4 meter) diameter package, counting the outstretched heat shield.

Schiaparelli and the orbiter will travel for seven months after the launch to get to Mars, but they'll part ways about three days before reaching the Martian atmosphere, on Oct. 16, European Space Agency researchers said in a statement. At that point, Schiaparelli will separate and then coast toward Mars, still in hibernation to conserve power. [How Europe's ExoMars Missions to Mars Work (Infographic)]

As it hurtles downward, Schiaparelli's heat shields will reach temperatures of about 2,732 degrees Fahrenheit (1,500 degrees Celsius).

After slowing even further, the experimental lander will release its front and back heat shields and switch on radar sensors to figure out how far it is from the Martian surface. The parachute will be left behind on the back heat shield, so to slow down even more, the lander will switch on its thrusters until it gets down to about 6.6 feet (2m) off the ground, slowed to just 4.3 mph (7 kph).

Then it'll switch off its thrusters and drop to the ground, and the bottom of the module, like the crumple zone on the front of a car, will break its fall as it plunks down on the surface of Mars' Meridiani Planum, possibly within view of NASA's Opportunity rover.

A lot for the lander to get through in just 6 minutes since entering the atmosphere.

For as long as its leftover battery life lasts — just a few days, likely — the lander will study Mars' wind speed and direction, humidity, pressure, air temperature, atmosphere transparency, electric fields and more, sending its measurements up to the orbiter through two antennas. (It will send measurements during the 6-minute landing process, too.)

Any science measurements the lander sends from the surface is a bonus: The lander's main purpose is to pave the way for the rover launching in 2018, officials said in the statement. Using knowledge gained from Schiaparelli, that future rover will be able to land safely and begin its hunt for signs of life.