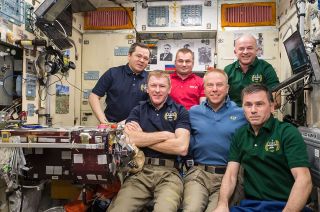 The Expedition 47 crew poses for the three millionth image taken aboard the International Space Station on April 30, 2016.
(Image: © NASA)

The undocking tonight (June 17),and the departure and return to Earth tomorrow will be streaming live here on Space.com, courtesy of NASA TV.

The three space fliers' mission stretched to 186 days in space. While there, they grappled and secured multiple arriving supply ships, set the largest experimental fire in space and explored a new inflatable habitat room. Peake even ran the London Marathon.

Today, Kopra transferred command of the space station to NASA astronaut Jeff Williams, and the undocking action starts tonight at 10:15 p.m. EDT (0215 GMT) with farewells among the crew and the hatch closure.

Tomorrow at 1:52 a.m. EDT (0552 GMT), the departing trio will undock the Soyuz TMA-19M spacecraft, piloted by Malenchenko, and the NASA TV coverage will last until the spacecraft lands at the Baikonur Cosmodrome in Kazakhstan at 5:15 a.m. EDT (0915 GMT).

Video of the landing, as well as post-landing interviews with Kopra and Peake, will be re-broadcast at 6 p.m. EDT (2200 GMT).

In early July, the crew will be back up to six — American astronaut Kate Rubins, a first-time flier, will lift off that day along with Russian cosmonaut Anatoly Ivanishin and Japanese astronaut Takuya Onishi. The replacement crew of three will fly to the station on an upgraded Soyuz craft — the trio were originally going to launch June 24, but the Russian space agency Roscosmos cited a need to test the spacecraft's software further.