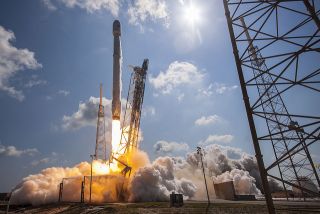 SpaceX successfully launched two satellites to orbit today (June 15) but couldn't quite pull off its fourth consecutive rocket landing at sea in the process.

The first stage of the California-based company's Falcon 9 rocket managed to hit its target — a robotic "droneship" stationed in the Atlantic Ocean, a few hundred miles off the Florida coast — but wasn't able to stick the landing.

The Falcon 9 lifted off from Florida's Cape Canaveral Air Force Station today at 10:29 a.m. EDT (1429 GMT). About 2.5 minutes later, the booster's two stages separated; the upper stage continued carrying the Eutelsat 117 West B and ABS-2A commercial communications satellites to a distant geostationary transfer orbit (GTO), while the first stage turned around and headed back to Earth.

Then, less than nine minutes after launch, the first stage descended onto the deck of "Of Course I Still Love You," one of SpaceX's two autonomous, ocean-going landing platforms. SpaceX's live video feed cut out during the landing attempt, so it's unclear exactly what happened. But Musk soon confirmed that the booster didn't survive the touchdown try.

SpaceX representatives had cautioned before today's launch that the landing would be tough. Rockets toting satellites to GTO have to travel very fast, which means that the Falcon 9 first stage was subjected to very high temperatures and forces when it came back into Earth's atmosphere.

"Looks like thrust was low on 1 of 3 landing engines. High g landings v sensitive to all engines operating at max," Musk tweeted today.

"Upgrades underway to enable rocket to compensate for a thrust shortfall on one of the three landing engines. Probably get there end of year," he said in another tweet, adding that the droneship is OK and that video of the landing attempt will probably be available later today.

Landings during GTO missions, while difficult, are not impossible. SpaceX's two previous droneship rocket touchdowns — successes that occurred on May 6 and May 27 — also came during launches to the distant orbit.

The company also pulled off an ocean landing on April 8, but that one was a bit easier: The Falcon 9 blasted SpaceX's robotic Dragon cargo capsule toward the International Space Station, which orbits at an altitude of just 240 miles (385 kilometers). (GTO lies about 22,245 miles, or 35,800 km, from Earth.)

SpaceX also brought a Falcon 9 first stage back on land at Cape Canaveral in December, during the launch of 11 satellites for customer Orbcomm.

These touchdowns, and the failed attempts as well, are part of the company's effort to develop fully and rapidly reusable rockets, a breakthrough that Musk has said would cut the cost of spaceflight dramatically.

Indeed, SpaceX aims to refly the booster that landed on April 8 as early as this fall, Musk has said. (The rocket that came down in December will go on display at SpaceX's headquarters in Hawthorne, California, while the Falcon 9 that touched down on May 6 will be used as a testbed to certify other rockets, SpaceX representatives have said; the fate of the May 27 vehicle is unclear.)

Ideally, SpaceX would prefer to land every rocket on terra firma, at or near the launch site; doing so would speed up the inspection and reflight processes. But some missions require so much fuel that the booster can't make it all the way back, and must therefore come down on a droneship.