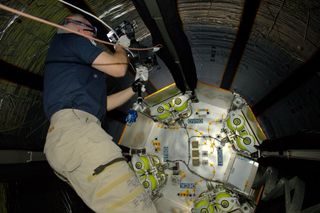 NASA astronaut Jeff Williams became one of the first humans to enter an expandable habitat in space. Williams is shown here in the Bigelow Expandable Activity Module (BEAM) on June 6, 2016.
(Image: © ESA/NASA)

Yesterday (June 6), astronauts on the International Space Station opened the hatch and entered the Bigelow Expandable Activity Module (BEAM) for the first time. This is the first expandable room to be occupied by astronauts in orbit, and new images provide a glimpse inside this futuristic, inflatable space habitat.

Astronaut Jeff Williams and cosmonaut Oleg Skripochka entered the habitat around 5 a.m. EDT (0900 GMT) yesterday. The module isn't designed to host humans full time, so it appears mostly empty except for support hardware (like air tanks). However, the International Space Station is effectively a series of trailers strung together and shared by up to 13 people, so the empty space available in BEAM may have been a gorgeous sight for Williams and Skripochka. [The Bigelow Expandable Activity Module in Pictures]

From certain angles, the interior walls of BEAM look black, but a shot from inside the room shows that they are actually reflective, with (what look like) black stripes running lengthwise. Upon entering BEAM, Williams told mission control that the habitat "looked pristine and that it was cold inside, but there was no evidence of condensation on any surfaces," according to an agency representative speaking on NASA TV.

Astronauts will enter the habitat periodically to collect data from multiple sensors that monitor BEAM's status and performance. On Monday, Williams and Skripochka collected an air sample, installed air ducts and began downloading data collected during the expansion of the new room.

"Over the next two days they have a few more … opportunities to enter BEAM and to deploy other sensors and equipment inside," the NASA representative said. The crewmembers are scheduled to enter BEAM today and tomorrow (June 7 and 8), the representative said, adding that after each crew entry, the BEAM hatch will be closed. There is no schedule for crew entries into BEAM after Wednesday, according to the representative, but NASA anticipates six to seven crew entries per year.

BEAM was attached to the station on April 16 and inflated to its full size on May 28. This is the first time humans have occupied an expandable habitat in space, even though Bigelow (a private company) has tested its modules in orbit before.

BEAM will stay attached to the station for two years, after which it will be jettisoned into Earth's atmosphere, where it will burn up upon re-entry.

Expandable space habitats offer certain advantages over rigid structures. Primarily, expandable habitats are lighter, and because they can be compressed, their maximum size isn't limited to the maximum size of a rocket's cargo compartment. (The larger modules on the space station went around this problem by flying directly into space on top of a rocket, instead of packing the module inside a cargo capsule). When compressed, BEAM was about 7 feet long by 8 feet wide (2.1 by 2.4 m).