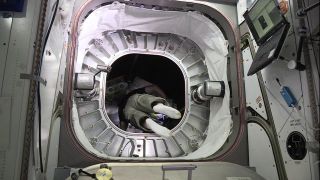 The International Space Station's new inflatable habitat has had its first visitors.

Williams and cosmonaut Oleg Skripochka then entered BEAM "to collect an air sample and begin downloading data from sensors on the dynamics of BEAM's expansion," NASA officials wrote in an update today. "Williams told flight controllers at Mission Control, Houston, that BEAM looked 'pristine' and said it was cold inside, but that there was no evidence of any condensation on its inner surfaces."

BEAM, which was built by Nevada-based Bigelow Aerospace, launched toward the International Space Station (ISS) April 8 in a compressed configuration aboard SpaceX's robotic Dragon cargo capsule. The module was attached to the ISS a week later and inflated during a seven-hour stretch on May 28. (An earlier attempt to expand BEAM, on May 26, was aborted when pressures inside the habitat rose to higher-than-expected levels.)

BEAM is part of a project to test how expandable habitats — which provide more usable volume per unit launch mass than do traditional rigid modules — perform in space. Over the next two years, NASA and Bigelow will study how well BEAM protects against temperature extremes, radiation and micrometeorite strikes.

Astronauts will not live inside BEAM during this time; rather, they will make occasional forays into the module to deploy sensors or perform inspections, NASA officials have said. The next opportunities for crewmembers to enter the module will come Tuesday and Wednesday (June 7 and June 8), the officials added.

Bigelow Aerospace is developing much larger expandable habitats, which the company hopes will become the backbone of future space stations and outposts on other worlds, such as Mars. The B330 module, for example, will provide 11,650 cubic feet (330 cubic m) of internal volume.