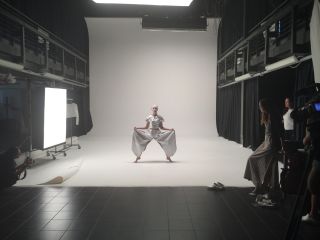 Fashion and spaceflight meet in a new generation of clothing created as part of a collaboration between the European Space Agency (ESA) and five European fashion schools.

Five European astronauts will travel or have traveled to the International Space Station between 2014 and 2016. The challenge for the schools taking part in the collaboration is to come up with practical fashions to reflect each astronaut's journey. The clothing designs will incorporate elements useful to space travel, such as embedded sensors and absorbent textiles.

The project is called "Couture in Orbit" ("couture" is French for "sewing"), and every design must follow one of five assigned themes: technology, environment, innovation, health or sport. You can see more of the wild space-inspired fashion ideas here in our full gallery.

"The schools are taking inspiration for their designs from the mission experiences of ESA astronauts from their own country," ESA officials said in a statement.

"Whenever possible, they have talked directly with their national ESA astronaut to learn more about topics such as Earth observation, climate monitoring, health and nutrition — as well as details of everyday life in the void beyond our home world," the statement continued.

The project, which is not a competition, will conclude with a fashion show at London's Science Museum. Each of the final five designs will be showcased on catwalks.

Fashion Design Akademiet in Denmark, the Politecnico di Milano in Italy, and the International University of Art for Fashion in Germany and France are among participating schools. Each of the schools has its own sponsor and will integrate the technologies of that sponsor into the design, ESA officials added. Examples of that integration could include "tracking the wearer's movement and generating usable electricity, [as well as] regulating their temperature and transpiration," the officials said.

The next European to fly in space will be French astronaut Thomas Pesquet, who will be part of Expedition 50/51 starting in November. Earlier this month, German astronaut Alexander Gerst was named commander of Expedition 57 in November 2018. Gerst last traveled to the space station in 2014.