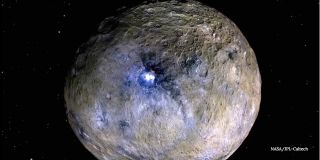 NASA is considering sending the Dawn spacecraft to a third asteroid after it finishes its mission at the dwarf planet Ceres.

Dawn, which visited the asteroid Vesta before putting itself into orbit around Ceres, was expected to run out of fuel for its novel ion propulsion system by the end of this year.

The spacecraft had used extra propellant for thruster burns to orientate itself in space after problems with its reaction wheels prompted flight controllers to shut down the system. The wheels' spin naturally generates momentum to point the spacecraft without using fuel.

Upon arrival at Ceres in March 2015, flight controllers turned Dawn's reaction wheels back on and found the system operational.

"They worked great. There's been no other anomalies in that particular area for Dawn," NASA planetary science chief Jim Green told a science advisory committee during a webcast meeting this week.

Engineers then reassessed how much xenon propellant Dawn has left for science operations.

"It turns out it is actually pretty significant," Green said.

With enough fuel for at least another year of operations, NASA asked the Dawn team to submit a proposal for an extended mission.

Green declined to elaborate on an earlier discussion about options for Dawn, including sending the probe to visit another body in the main asteroid belt.

"They have had a variety of things they've discussed, and because it's a proposal I'm not at liberty to talk about it. But once again, an exciting mission," Green said.

In an email, Dawn lead scientist Christopher Russell told DNews, "Discussion of this topic is premature. We have only one approved continued operation plan and that is to remain in our present orbit."

That may change before the end of September.

"An extended mission review is underway," Green told the advisory group. "The panels have met and final deliberations are not quite done yet. We'll announce what NASA's decision is on that in the August-September time frame."