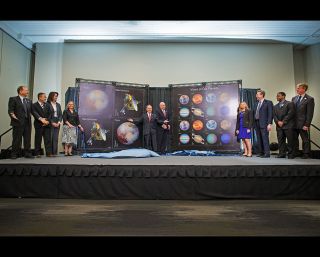 NEW YORK — Alan Stern and other NASA officials celebrated the release of new "Pluto — Explored!" and "Views of our Planets" stamps Tuesday (May 31) with a crowd of more than 500 stamp enthusiasts, leading a spirited countdown to the official reveal of the new stamps.

Stern, the principal investigator of the New Horizons mission that flew by Pluto last July, and the other researchers spoke to the significance of the Pluto flyby and the fact that America was the first to reach all nine classical planets. The speakers also looked forward to the future of NASA exploration. Afterward, a long, snaking line of World Stamp Show attendees waited for autographs from the scientists — Pluto posters and stamp envelopes in tow.

"This is the best picture of Pluto ever made before New Horizons," Stern began, showing a blurred spot of gray a few pixels across. "Don't laugh — because I was the principal investigator, so I took that picture, more or less." [Photos: Space Age Postage Stamps Through History]

"Three billion miles away, that's all you can see in the distance," he added. "This is why we explore. We send spacecraft to the planets because we have to go closer to really reveal their true nature, to understand their origin. To understand our place in the universe."

Stern and other speakers described the stamp that, 25 years ago, marked Pluto as "Not Yet Explored" — which acted as a "rallying cry" to carry out a mission to the far-off dwarf planet. When New Horizons finally lifted off in 2006, researchers put one of those stamps on board.

"It did help mobilize energy," Stern said. "And it did help many of us stay motivated during the many years it took to see a mission like New Horizons become funded. … [The probe] flew for 3 billion miles, nine and a half years, setting a speed record across the orbit of every planet in our solar system, Mars outward."

"Instead of the dull space rock that many of us expected — I plead guilty," Stofan said during her portion of the event, "Pluto has proved itself to be a complex and dynamic world with mountains, really cool moons, exotic ices and even a heart. (Stofan was referring to the heart-shaped plain visible on the dwarf planet's surface.)And after its flyby, New Horizons sent back a photo that went onto the updated Pluto stamp, revealing the dwarf planet for the first time in all its complex, textured glory. The probe also sent back a stream of data, which is still coming in today.

"The postal service rallied in near-record time with this updated stamp to set the record straight," she added.

Mary-Anne Penner, the United States Postal Services' director of stamp services, told Space.com that the agency was just waiting for Pluto's portrait before putting out the new classical planet series.

"We were already waiting. We knew it was coming," she said. "It takes about three years for a stamp to be developed, so it was actually there on the back burner, and we were just waiting to get the green light to get out of the gate."

While she couldn't speak to any new space-themed stamps coming out in the future, she said that space was a perennial favorite. "We love space," she said. "Everybody loves space, actually. That's probably one of the things we get the most inquiries on — what space stamps do you have out right now? What do you have surrounding space?"

So chances are, among the chosen few from the 40,000 stamp suggestions submitted per year, there are other gems that will show new views of the universe.