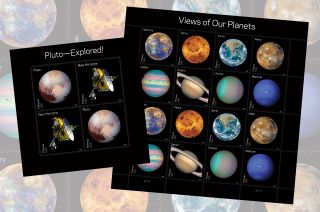 The United States Postal Service's new "Views of Our Planets" and "Pluto—Explored!" stamps are being issued May 31, 2016.
(Image: © USPS via collectSPACE.com)

You can now embark on a tour of our solar system — from the innermost planet Mercury to the dwarf planet Pluto — just by visiting your local United States Post Office.

The U.S. Postal Service (USPS) is issuing Tuesday (May 31) two sets of postage stamps depicting the eight planets that circle the Sun and the icy world that orbits out beyond them.

"The 'Views of Our Planets' and 'Pluto—Explored!' stamps begin their own journeys today — on letters and packages to millions of homes and businesses throughout America," David Williams, the Postal Service's chief operating officer and executive vice president, stated in a release. "We trust they'll find a home in your own collections, too." [Photos: Space Age Postage Stamps Through History]

"The unveiling of these breathtaking new images of Pluto and our planets [is] an exciting day for NASA and for all who love space exploration," stated Green. "With the 2015 Pluto flyby, we've completed the initial reconnaissance of the solar system. We're grateful to the U.S. Postal Service for commemorating this historic achievement."

Planets, but not as you know them

Much has changed since the last time that the U.S. issued stamps depicting the planets.

Prior to Tuesday's release, the most recent set was issued in October 1991, when the Hubble Space Telescope was a year old in Earth orbit and had yet to have its flawed vision corrected. Probes had yet to begin circling Mercury, Jupiter or Saturn, and no mission had reached Pluto, which was still counted among the planets.

"The last time the [solar system stamps] were done, they were illustrated," Bill Gicker, art director for the USPS, told collectSPACE. "Looking through the more current images of the planets, I just thought, well, they are providing these amazing images, why do we not feature those on stamps? Why illustrate?"

The new "Views of Our Planets" set includes eight postage stamps, one each for Mercury, Venus, Earth, Mars, Jupiter, Saturn, Uranus and Neptune. The "Forever"-denomination stamps feature images that were taken by NASA planetary missions and by the Hubble Space Telescope.

Not all of the planets' images, though, were captured in the visual spectrum, as the public is familiar seeing them.

"We tried to tell a story," said Gicker. "We want stamps to be educational, so in creating the sheet as we did, instead of just showing what everyone thinks they know of what a planet looks like — any one of our particular planets — we decided to focus on different views taken through scientific means to gain further understanding."

For example, the colorful image of Mercury, based on data from the MESSENGER probe, features a false color view that notes chemical, mineralogical and physical differences in the otherwise grey rocks on its surface. Similarly, Jupiter is shown as pictured by the Hubble Telescope in the near-infrared, making the usually red, orange and yellow-tinted gas giant appear to be pastel colored.

"That became the mission we had in creating the stamps, to show the different ways the planets are being looked at through various technologies," Gicker said.

Text on the reverse of the stamp panes detail the source of each image and what was learned by the way in which the planets were observed.

Including Pluto, without taking sides

Pluto, and the NASA mission that first encountered it, gets its own set of two stamps. The separate issue allowed the USPS to avoid entering the debate over whether Pluto is a planet or not.

"We, as the Postal Service, did not want to enter into the debate or take sides, but with the happenstance the way it was — with New Horizons arriving at Pluto, it gave us the perfect opportunity to be able to issue Pluto with the rest of the planets," said Gicker. "We were working very hard not to enter into the fray."

Like the "Views of Our Planets" stamps, one of the "Pluto—Explored!" stamps depicts the dwarf planet using data returned by the New Horizons spacecraft. A composite of four images from the Long Range Reconnaissance Imager (LORRI), combined with color data from the Ralph imaging instrument, the stamp shows the now-iconic, heart-shaped feature on Pluto's surface.

The second issue in the set features a NASA illustration of the New Horizons probe itself.

The set's title, "Pluto—Explored!" is meant as a subtle nod to the previous 1991 solar system stamps, which included a note that Pluto had yet to be visited. An example of the "Not Yet Explored" 29-cent stamp was carried aboard New Horizons to Pluto.

"We wanted to cause that little smile of acknowledgement, but this was a new set," Gicker explained. "We wanted to try it fully as a new set, with the title nod to the old stamp. We thought about reproducing the old stamp with the new title, but we thought with these images coming back, that was the most interesting thing, this time we're really seeing [Pluto] in any kind of detail."

"These new stamps recognize that Pluto has indeed been explored by the New Horizons spacecraft," said Stern in a statement, "and has been revealed to be a complex and fascinating world.”

See collectSPACE for instructions on how to request first-day-of-issue postmarks for the new “Views of Our Planets” and “Pluto—Explored!” USPS stamps.