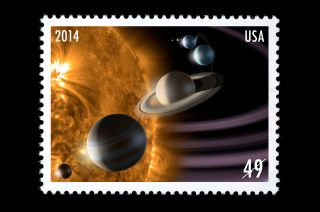 The "Solar System" is among the "approved subjects" for United States Postal Service (USPS) stamps in 2014, according to a list leaked to the press. Fictional stamp created by collectSPACE.com for article illustration only.
(Image: © collectSPACE.com/NASA)

A confidential document shared with The Washington Post includes the "Solar System" on a list of U.S. stamp topics that have not yet been announced publicly but are planned for release later this year. The "approved subjects" include the "Solar System" among the postage stamps "in design development" as of Jan. 7, 2014.

Although some work on the list's stamps has started, the United States Postal Service's (USPS) executive director for stamp services, Susan McGowan, told the newspaper that the topics are "subject to change" at any time. [Photos: Space Age Postage Stamps]

The inclusion of the "Solar System" on the list though, is consistent with the minutes from a 2013 meeting leaked to the weekly magazine Linn's Stamp News last May. In that report, the space stamps were targeted for this October.

Both the meeting's minutes and subject list originated with the Citizens' Stamps Advisory Committee, a panel tasked with reviewing stamp ideas and making recommendations to the U.S. Postmaster.

In the past, the Postal Service announced most of its next year's stamp schedule at once. In recent years, the USPS has chosen to reveal new issues as the year progresses.

To date, the USPS has released information about stamps it plans to issue this year through July.

No other details about the planetary-themed postage have been made public. The leaked reports do not stipulate how many different stamp designs would comprise the set.

If they are released this year, the "Solar System" stamps will be the first U.S. space or astronomy-topical stamps in three years.

On May 4, 2011, the USPS issued a pair of stamps (or "se-tenant") to commemorate both the 50th anniversary of Mercury astronaut Alan Shepard launching to become the first American in space and NASA's MESSENGER probe becoming the first spacecraft to orbit the planet Mercury.

The Alan Shepard stamp marked the first time the USPS honored a NASA astronaut. The MESSENGER issue was the third stamp to depict the planet Mercury, including the USPS's first set inspired by the solar system.

Released on Oct. 1, 1991, the USPS "Space Exploration" pane included nine different stamps — one for each planet and a U.S. robotic space mission that visited it. The set's ninth stamp, for Pluto, was labeled "Not Yet Explored."

One of those Pluto stamps was launched toward the small icy world on NASA's New Horizons mission in 2006. Six years later, the probe's flight team and more than 12,000 supporters petitioned the USPS to issue a stamp for the spacecraft in 2015, to coincide with its flyby of Pluto.

In February 2013, the New Horizons team received notice that their idea would be put up for review by the Citizens' Stamp Advisory Committee (CSAC). A year later and the approved subjects list published by The Washington Post, which included stamp topics for 2014 through 2016, didn't include mention of New Horizons or Pluto.

The only space-themed subject on the Post's acquired list is the "Solar System." Whether that means that the CSAC chose to combine the New Horizons' request with the solar system issue or if it is still under review (or has now been rejected) is still to be seen.