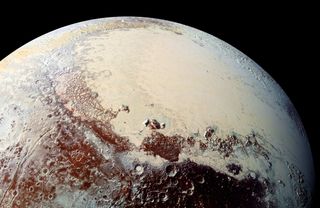 This snapshot captured by NASA's New Horizons spacecraft shows the western region of the heart-shaped area informally known as Sputnik Planum, which has been found to be rich in nitrogen, carbon monoxide and methane ices. The image combines blue, red and infrared images taken by the Ralph/Multispectral Visual Imaging Camera (MVIC).
(Image: © NASA/JHUAPL/SwRI)

And the hits just keep on coming. Another batch of Pluto photos from NASA's New Horizons probe reveals the majesty and mystery of this icy world.

The images are the latest releases from the treasure trove of data and snapshots captured by during New Horizon's close flyby of Pluto on July 14, 2015. One of the new images gives a close-up view of the unofficially titled Sputnik Planum, a heart-shaped region on Pluto's surface that is suspiciously crater-free.

This week, five new research papers appeared in the journal Science, discussing new discoveries about Pluto that have been revealed thanks to the data collected by New Horizons. Check below to see three more jaw-dropping snapshots of Pluto. [Destination Pluto: NASA's New Horizons Mission in Pictures]

One haunting snapshot, taken by the Ralph/Multispectral Visible Imaging Camera (MVIC), captures layers of atmospheric haze above Pluto's surface. The different layers of haze (about 20 can be seen in this image) have been found to extend across the surface for hundreds of kilometers. But according to NASA, they are not strictly parallel to the dwarf planet's surface. "For example, scientists note a haze layer about 3 miles (5 kilometers) above the surface (lower-left area of the image), which descends to the surface at the right," according to a statement from the space agency.

The top portion of this image shows that a smooth section of the informally named Sputnik Planum is 228 miles (367 km) wide. Beneath it is a close-up of the also informally named Vulcan Planum on the surface of Pluto's largest moon, Charon, that is 194 miles (312 km) wide.

Sputnik Planum is free of craters, which suggests that it experienced recent geologic activity. Vulcan Planum is dotted with not only craters, but also deep troughs. Also visible is the mountain Clarke Mons, which appears to be surrounded by a deep "moat." The highly textured surface indicates that the surface of Charon is ancient, according to NASA. The new Science papers report that water-ice-rich Vulcan Planum "is likely a vast cryovolcanic flow or flows that erupted onto Charon's surface about 4 billion years ago. These flows are likely related to the freezing of an internal ocean that globally ruptured Charon's crust," the statement said.

The region shown in the image is just underneath the western lobe of Sputnik Planum (the tip of the craterless plane dips down at the top middle of the image). Ices that fill Sputnik Planum have altered the surrounding terrain, "creating a chaoslike array of blocky mountains," NASA officials said.

NASA has rounded up a list of the top new findings reported in those research papers. Because of the spacecraft's relatively low data transfer rate, information collected during the flyby is still being downloaded to Earth, which means scientists still have more layers to pull back on this amazing object.