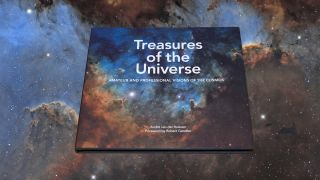 "Treasures of the Universe: Amateur and professional visions of the cosmos," by André van der Hoeven.

The new book "Treasures of the Universe: Amateur and Professional Visions of the Cosmos" takes readers on a tour of the universe through the eyes of both professional and amateur telescopes.

Skimming through the book, readers will immediately notice that the pages are overflowing with cosmic eye candy. The white text is almost squeezed out by the full-page images of galaxies, stars and other objects. The images come from many of the usual suspects: the Hubble Space Telescope, the Chandra X-ray Observatory and the Spitzer Space Telescope. But some of the snapshots were taken by amateur astrophotographers, such as the book's author, André van der Hoeven.

Van der Hoeven doesn't delve too deep into the science, but the added text does give readers a slightly better understanding of what the images show, and how seeing those objects in different wavelengths of light reveals new information. The result is an informative and gorgeous tour of the universe.

One section of the book takes a look at M33, also known as the Triangulum Galaxy. Images of M33 taken by the Spitzer Space Telescope (which sees the universe in infrared light) revealed that the galaxy is, in some places, twice as large as what optical telescopes, like Hubble, showed. Van der Hoeven places the images from Spitzer and Hubble side by side to illustrate that point. A third image was taken by an amateur astronomer; M33 is relatively close to the Milky Way, making it a prime target for amateurs.

"Images [that] amateurs make today compete with the best images made in the 1970s and '80s of the last century by professionals," he wrote in the book's preface.

Van der Hoeven's photography has been featured multiple times on Space.com. His interest in astrophotography began in 2010.

"I will never forget the excitement when my first images of a spiral galaxy like our own showed on my screen," he continued. "Realizing that the light caught on my CCD [camera] had left this galaxy more than 25 million years ago was astounding and made me feel small and humble."

In 2012, van der Hoeven took second place in the European Space Agency's Hubble Hidden Treasure Competition, which invited amateurs to sift through data from Hubble and produce new images through their own processing.

The book is available in digital and hardcover versions via van der Hoeven's website.