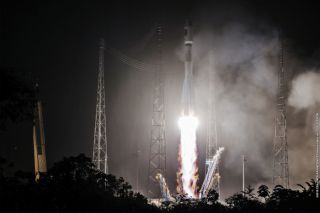 PARIS—A Europeanized Russian Soyuz rocket on Tuesday (May 24) successfully placed two European Galileo positioning, navigation and timing satellites into medium-Earth orbit — the 13th and 14th in a series of 26 Galileo spacecraft, with more to come.

Operating from Europe's Guiana Space Center in French Guiana, on the northeast coast of South America, the Soyuz rocket's Fregat upper stage released the two 733-kilogram spacecraft into their 22,522-kilometer-altitude orbit some three hours and 48 minutes after liftoff.

In addition to four in-orbit-validation satellites, one of which is no longer functioning correctly, the European Commission ordered 22 spacecraft from a consortium led by OHB SE of Bremen, Germany, with the payloads provided by SSTL of Guildford, England.

Specially modified heavy-lift Ariane 5 rockets are scheduled to launch the remaining 12 satellites, four at a time. The first of the three was scheduled for Nov. 17, with the other two set for 2017 and 2018.

The Galileo constellation, with many of the same performance goals as the U.S. GPS, Russia's Glonass and China's Beidou networks, is considered fully operational at 24 satellites. But European officials have always said they would launch 30 satellites to provide sufficient in-orbit backup.

Paul Verhoef, director of navigation at the 22-nation European Space Agency, said an invitation to tender to industry for eight more Galileo satellites, plus up to six options, had been issued earlier this month.

A contract decision is expected by the end of the year and will present ESA and the European Commission — the executive arm of the 28-nation European Union and the owner of the Galileo program — with a difficult choice.

The least-expensive decision ostensibly would be to order recurrent models from the OHB team to take advantage of the scale economies that have already brought down the satellites' cost.

But the commission has been adamant about wanting to maintain dual sourcing for Galileo wherever possible, which would argue in favor of structuring the contract-tender process in some way as to reduce the OHB advantage and favor bids by others — Airbus Defence and Space, Thales Alenia Space and perhaps others.

The Galileo network is on track to offer initial services late this year, and full service in 2020. Galileo services include an Open Service, which resembles what's available to users from the U.S. GPS system; a Search and Rescue Service, which includes a return message to advise victims that their distress messages have been received; and the secure Public Regulated Service (PRS), reserved for military and civil-protection authorities.

Once that has occurred, the commission will open its own negotiations with U.S. and Norwegian authorities to discuss terms of access to PRS.

A Galileo May 23 prelaunch briefing and the Galileo webcast were the latest indications of Galileo owners' discomfort with the idea that European national military forces are all but certain to be the biggest users of PRS. Jean limited his summary of PRS users to police and customs authorities.

Galileo's Commercial Service, a feature that distinguishes it from GPS, is still some ways off. It will not be among the services to debut this year.

With early satellite infrastructure now nearing completion, the focus is shifting to the ground segment and the user market.

Verhoef said a five-month test of the Galileo ground network started on March 1 and will consist of monitoring performance to prepare for initial services by the end of the year.

Verhoef said software upgrades to the ground network to enable it to function with the planned 30 satellites is also under way.

The battle for the smartphone market

"The next step is to embark these chips on smartphones on the receiver side," des Dorides said during the briefing, adding that the start of initial Galileo services this year will spur chipset development. "Today they [the chip manufacturers such as Broadcom and Qualcomm] see Galileo as the third constellation of reference. There is certainly commercial interest there."

With the United States, Russia and China also providing global navigation services, and India and Japan building large regional networks with their own satellites, the question is whether the major smartphone builders and others will integrate multiple constellations into their hardware.