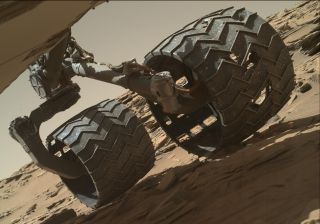 The team operating NASA's Curiosity Mars rover uses the MAHLI camera on the rover's arm to check the condition of the wheels at routine intervals.
(Image: © NASA/JPL-Caltech/MSSS)

The rugged terrain on Mars is taking its toll on the six wheels of NASA's Curiosity rover, but the Red Planet robot should be able to complete its mountain-climbing science mission regardless, NASA officials said.

"Cracks and punctures have been gradually accumulating at the pace we anticipated, based on testing we performed at JPL," Lee said in a statement. "Given our longevity projections, I am confident these wheels will get us to the destinations on Mount Sharp that have been in our plans since before landing."

Curiosity touched down inside Mars' 96-mile-wide (154 km) Gale Crater in August 2012 and soon found evidence that the area could have supported microbial life in the ancient past. In July 2013, the rover set out for the base of Mount Sharp, initiating a 5-mile-long (8 km) journey that would take 14 months to complete.

The driving in Gale Crater has been rough. Holes and punctures in the robot's aluminum wheels, whose skin is just half as thick as a dime, became noticeable in 2013; Curiosity's handlers responded by routing the rover over gentler terrain to the extent possible and ramping up wheel testing at JPL.

This Earth-based work suggested that the 20-inch-tall (51 centimeters) wheels reach about 60 percent of their mileage limit at a specific point: when three of their 19 grousers — the zigzag treads that provide traction and bear most of Curiosity's weight — have broken, NASA officials said.

So far, the mission team has seen no evidence of any broken grousers, the officials added. (Curiosity takes photos of its wheels every 1,650 feet, or 500 meters.) The rover, NASA officials said, should therefore be able to make it to three key sites that Curiosity team members have been targeting for quite some time: an area rich in hematite, an iron-oxide mineral; a rock unit located farther on that hosts lots of clay minerals; and another rock site beyond that containing sulfates.

"At a current odometry of 7.9 miles (12.7 km) since its August 2012 landing, Curiosity's wheels are projected to have more than enough life remaining to investigate the hematite, clay and sulfate units ahead, even in the unlikely case that up to three grousers break soon," NASA officials wrote in the same statement. "The driving distance to the start of the sulfate-rich layers is roughly 4.7 miles (7.5 km) from the rover's current location."

Studying such rock layers can yield information about Mars' past habitability. For example, clay minerals generally form in the presence of liquid water with a near-neutral pH, and therefore could be good indicators of past environments that were conducive to life, mission scientists have said.

Curiosity is now nearly finished crossing a stretch of particularly rough and rocky terrain that mission scientists call the Naukluft Plateau. The rover climbed onto the plateau in early March, after spending a few weeks studying sand dunes lower down on Mount Sharp.