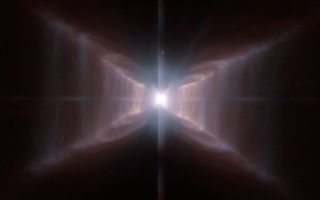 At 2,300 light-years from Earth in the Constellation Monoceros, the Red Rectangle presents an uncommon sight.
(Image: © ESA/Hubble and NASA)

The Red Rectangle in the constellation Monoceros (the Unicorn) roughly 2,300 light-years away, also known as star HD 44179, is a unique illustration of a proto-planetary nebula. The image captured by the Hubble space telescope unveils that rather than a rectangle, the nebula is an X with dense dust filling out the "rectangle" shape. This star, similar to our sun, is nearing the end of its life thus spewing gas and other substances which will eventually create a planetary nebula. [More Hubble Images.]