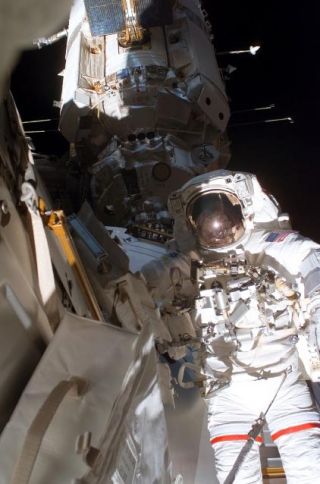 If theyfinish their tasks early, the spacewalkers are due to ascend the space station'smast-likePort 6 (P6) truss and tap on the bottom of one of its solar array boxes inefforts to loosen stuck guide wires that have prevented the 115-foot (35-meter)wing from retracting properly.

"The solararray viewing, pushing on that box, is a get ahead task," Kirk Shireman, NASA'sISS deputy program manger, said late Friday. "The primary objective tomorrow isto rewire the space station."

Curbeam andfellow STS-116mission specialist Christer Fuglesang, of the European Space Agency (ESA),successfully rewired the first half of the station's electrical grid during a five-hourspacewalk on Thursday. Discovery pilot WilliamOefelein will choreograph the spacewalk from the shuttle's flight deck.

"Hopefully,it will go just the same and we'll be just as good," Williams, a newly arrivedmember of the space station's Expedition14 crew who will make her spacewalk debut, told reporters Thursday. "I'mjust looking forward to going outside and checking out the planet. It should bepretty nice."

Curbeam andWilliams are expected to spend the first 90 minutes of today's spacewalkwrangling stiff power cables, connecting 21 of them while unplugging 18, to feedpower though a pair of Main Bus Switching Units used in Channels 1 and 4 of thespace station's power grid. They are also charged with attaching a grapple baralong with some debris panels, stored in a pyramid-like fashion dubbed the "Christmastree," destined to shield a Russian station module against micrometeorites tothe space station's exterior.

During thecritical power system overhaul, lights, smoke detectors, ventilation fans andother ISS systems will be shut off as half of the orbital laboratory is powereddown while Curbeam and Williams reconfigure the station's power system to itspermanent configuration. A vital cooling system pump must perform properlyafterward to ensure the work is a success.

Only ifthey complete all of their assigned tasks swiftly will Curbeam and Williams begiven the go ahead to inspect, then tap, the portside wing of the space station'sP6 solar array. Either of the astronauts could do the tapping, which includespushing up or forward on the afflicted array's storage box.

"It's apat," Shireman said of the push, adding that the spacewalkers are authorized toapply a gentle five pounds of force for the job.

Shuttle andISS astronauts partiallyretracted the six-year-old P6 array on Wednesday to allow a separate pairof solar wings on the station's Port 3/Port4 (P3/P4) truss beneath it to begin rotating to track the Sun. But one of the array's two solarpanels, known as blankets, refused to fold properly [image].ISS flight controllers believe one of three guide wires is hung up in a seriesof stainless steel grommets [image].

Effortsto loosen the jam remotely Friday proved fruitless. ISS flight controllersfirst wiggled the array itself and then asked Expedition 14 flight engineer andESA astronaut ThomasReiter to perform a vigorous workout on an exercise machine that hascaused noticeable vibrations of the solar wing in the past. Neither attemptsucceeded.

"I'm verysorry to hear that, I was training for it for half a year," said Reiter, whohas lived aboard the ISS since July.

Mission managers have discussed thepossibility of adding a fourthspacewalk to the STS-116mission, which would occur no earlier than Monday if at all. Thepossibility of an additional spacewalk has always been included in Discovery's complicatedspaceflight in case major elements in the rewiring effort had to be repaired orreplaced entirely.

"I'm notconcerned at all about the shock hazard, we've got a great team on the groundworking a plan that hopefully will work well for us," Curbeam said. "If nothingelse, I know it will be safe for us."