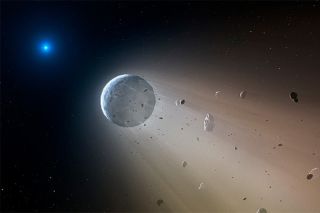 Our knowledge of exoplanet science has just advanced by many decades. Long before the first confirmed planetary finds in the 1990s, an observer in 1917 caught evidence of planetary debris around a new star, new research reveals.

The evidence came from an astronomical glass plate from the Carnegie Observatories' Collection that observed a white dwarf, the core of a star like our sun that has since died and shed its gassy layers.

"The unexpected realization that this 1917 plate from our archive contains the earliest recorded evidence of a polluted white dwarf system is just incredible," said Carnegie Observatories' director John Mulchaey, who assisted the review's author with the research, in a statement. "And the fact that it was made by such a prominent astronomer in our history as Walter Adams enhances the excitement."

ANALYSIS: Caught in the Act: White Dwarf is Killing a Planet

The spectrum Adams recorded of the chemical fingerprint of the star, known as van Maanen's star, showed heavier elements that should not have been there. The presence of calcium, magnesium and iron should have vanished into the star due to their weight.

These elements are evidence that there is a lot of debris in this planetary system that is continuously falling into the star, creating what is known as a "polluted white dwarf." They have only been known for about the last 12 years. It was an initial surprise to astronomers because white dwarfs, being so old, were not expected to have any leftover planetary material (which is common in young star systems.)

Here's where the mystery deepens: Planets have not actually been found around van Maanen's star (or stars like it), but lead author Jay Farihi of University College London said in a statement that it will likely happen before long.

ANALYSIS: Do Comets Rain Down on White Dwarf Stars?

"The mechanism that creates the rings of planetary debris, and the deposition onto the stellar atmosphere, requires the gravitational influence of full-fledged planets," he said. "The process couldn't occur unless there were planets there."

"Carnegie has one of the world's largest collections of astronomical plates with an archive that includes about 250,000 plates from three different observatories — Mount Wilson, Palomar, and Las Campanas," added Mulchaey. "We have a ton of history sitting in our basement and who knows what other finds we might unearth in the future?"

The paper was recently published in New Astronomy Reviews.