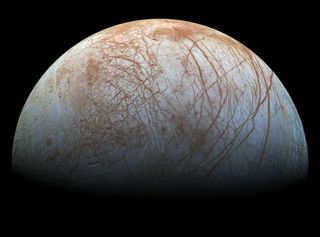 The tiny robotic spacecraft that Stephen Hawking and his colleagues plan to send between the stars could also revolutionize the hunt for alien life in Earth's own solar system.

The Starshot team hopes flotillas of such miniprobes eventually explore Alpha Centauri and other nearby star systems, studying the planets in those systems up close and searching for signs of life. But the nanocraft will first cut their teeth much closer to home. [Breakthrough Starshot: Interstellar Probe Announcement in Pictures]

"As a preliminary step, we will visit targets within the solar system," Avi Loeb, who chairs Harvard University's astronomy department and the Breakthrough Starshot advisory committee, said during a news conference today.

Loeb cited Saturn's moon Enceladus, which harbors an ocean of liquid water beneath its icy shell, as a good target for Starshot probes. Geysers erupt continuously from Enceladus' south polar region, blasting material from the hidden ocean far out into space.

"One can imagine flying such a small spacecraft through the plume and detecting molecules that might be indicative of life, fingerprints of life," Loeb said.

Visiting another icy moon that has an underground ocean — the Jovian satellite Europa — would make sense as well, said Breakthrough Starshot advisory committee member Freeman Dyson, a theoretical physicist at the Princeton Institute for Advanced Study in New Jersey.

"Supposing there are fish swimming in [Europa's] ocean, occasionally there will be an asteroid impact or a comet impact splashing huge amounts of water out onto the surface, so there should be lots of freeze-dried fish lying around," Dyson said during a phone call with reporters today after the press conference.

Provided the Starshot initiative manages to develop and prove out the required technology — a process that will likely take a number of years — there should be plenty of chances to explore Enceladus and Europa, as well as a number of other objects throughout the solar system, team members said.

Each individual nanocraft will be relatively cheap to manufacture, and many of them could be launched in a short amount of time, Starshot representatives said. Different probes could carry different instruments, together gathering (and beaming home) a diversity of scientific information about a target object or system. Indeed, the Starshot team aims to send hundreds or thousands of nanocraft to Alpha Centauri, for the sake of redundancy and to increase the scientific return.

"In addition to the very important mission to Alpha Centauri, we're going to explore everything in between, and hopefully detect life," Breakthrough Starshot Executive Director Pete Worden said during the call with reporters.